Cher Over the Holiday Break
Camille Paglia on Miley Cyrus

Review of The Lowdown CD 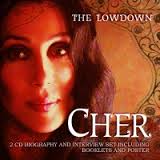 Anyway, I listened to Maximum Cher again while on my trip to Pennsylvania. There are very few Cher audio clips on it (despite the CDs bold promises) and it's mostly a UK-biography told by a female narrator who pronounces her surname funny. The narrator also mistakenly refers to mother Georgia as Georgeanna. The audio biography does tell the stories of Cher’s mother’s almost-abortion, Cher loss of virginity to an Italian neighbor named Jeff and the story shows us a streetwise kid with bad teeth, nose, posture, and complexion and how she created an unapproachable teen persona to hide herself. According to bio, Cher was 7 when she moved to LA. Harold Battiste originally hired Sonny (because he liked his enthusiasm) to do record promotion. 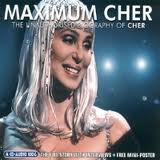 The CD does elaborate on the early awkwardness of being unaccomplished performers and how Hollywood looked down on them, seeing Cher as aloof and abrasive and Sonny as a comical and a nasal hippie. The CD details the Princess Margaret Charity Ball fiasco, where Sonny & Cher had to play to the Hollywood elite instead of the teenagers they were used to entertaining and how they experienced sound problems and Cher was amplified too loudly and eventually was cut off. Then Sonny's stand-up routine was seen as bad and offensive. Eventually they were heckled by a drunk and the Hollywood stars laughed at them. It seems traumatic but the narrator remarks how Cher would go on to outshine all of them.

The bio also talks about their The Man from UNCLE appearance, how the script was written for them and how Sonny took a few blows in the fake-fight scene. The bo claims there were 200 guests at Cher's wedding to Gregg Allman. Is that true?

Apparently the Brits loved Mermaids and the “The Shoop Shoop Song” spent five weeks at number one. The album Love Hurts also spent six weeks at number one. The narrator calls the movie Faithful an “excellent film.” Other errors on the CD include the mention that Cher performed the song “Bang Bang” in the movie Good Times, the claim that the Cher show saw its debut mid-1975. The CD makes no mention of Cher's very public affair with Gene Simmons (although it lists her many other lovers, big and small) or anything about her band Black Rose but states that “a friend Jean Simmons offered HER home in NY” to Cher before she found her own apartment. The CD also claims Cher recorded “Many Rivers to Cross” with Beevis & Butthead. The CD calls Cher a “living legend in a two-faced, backstabbing LA” and also “The Queen of Pop.”

Cher The Interview is the second CD in the set and it is a repackaging of various TV interviews going back to the mid-1980s.