Cher Over the Holiday Break 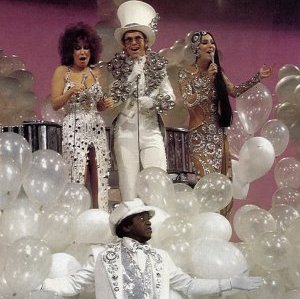 Before Christmas, my husband and I watched the SCTV Christmas Episodes on DVD. I’ve been interested in this video ever since I spent the last year watching old variety shows and trying to get an intellectual handle on the genre. My only experience of SCTV as a variety-show parody is from the performances of the hilarious Juul Haalmeyer Dancers, a very camp and hilarious send up of variety show dance troupes. Watch a five-minute documentary on them: http://vimeo.com/82136213).

In one SCTV episode there is a very funny parody of a piano-duel between Liberace and Elton John that originally aired on Dec 18, 1981. Elton John, played by Rick Moranis, is dressed in what strikes me as a spoof of the outfit and he wore on the Cher show premiere and special from 1975. (See video: https://www.youtube.com/watch?v=mgH286eOni4).

For Christmas, Mr. Cher Scholar and I (plus the dogs) drove to Pennsylvania to see my parents. It was cheaper and more fun than flying. We stopped along the way in Fort Smith (for historical work Mr. Cher Scholar is doing for the show Quick Draw), Memphis and Nashville. Definitely want to go back to Nashville and see a show and the Country Music Hall of Fame.

We played the iPod shuffle for three days both ways. That was plenty of time for the song “Podunk” to come up. I have always been confused by this song and what it was trying to do. Mr. Cher Scholar thankfully did some scholarin and cleared up the mystery for me. He said that Cher and Sonny are actually doing impersonations of Mae West and W.C. Fields. Oohhhhh. But you all probably knew that already. So ok, that makes it mildly better. 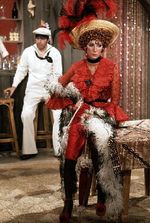 Truly, I am a fan of Cher’s Mae West impersonations, both her straight-out Mae West and her Sadie Thompson version. In fact, I think her Mae West is an essential component of her oeuvre of characters on those variety shows and, on top of that, emblematic of the larger media character she came to be. I believe in some ways this song "Podunk" is a very raw precursor to those impersonations. I just think she got better and more organic the next decade.

The Byrds version of “All I Really Want to Do” also came up on the iPod shuffle and I was able to think more about why their version failed in competition with Cher’s in 1965. I think there are definitely tonal problems with the Byrds version. Their version is too crisp and neat for one thing, almost bourgeois neatness, if you can accept the Byrds as bourgeois for a moment. Cher’s version is rougher, more Dylanish, hippie-er, scragglier, much more believable as a hippie/feminist creed coming from Cher. Which brings me to my second point: this song needs to be sung by a woman. It sounds like a creepy manipulation coming from a man. “Suuuurre you just wanna be my friend. Uh huh. Friends with benefits.” From a woman it sounds like an emancipated idea/argument. For these two reasons, Cher’s versions comes across as more authentic.

Over the break I also received this message from my friend Julie about a Cher tweet, She said:

I was looking at something else on twitter so decided to take a look at Cher’s page. This is my favorite one.

Cher also popped up in one of my dreams. I was driving a car and she was in the passenger seat complaining to me about how many factual errors this blog contains. I was complaining back to her that perfection is impossible and any attempts to be perfect are paralyzing. This excuse brings to mind a quote Mr. Cher Scholar just gave me from Ben Franklin, (“He who is good at making excuses is rarely good at anything else.”). Anyway, I was discussing with one of our LA friends who visited last week that fan/celebrity meetings seem impossibly stressful and who would want to do it because I would expect a similar dressing-down about my blog’s inaccuracies in person (and that would pretty much rob the fun right out of it). Besides, I’ve always said I'm a fan of the stuff, my activities are rebelliously unofficial and unsanctioned and I have never looked to my celebrity-obsession as a role model or idol. Although, ever since that Miley Cyrus fiasco, I have been brushing my tongue.

On eBay, I purchased recently two magazines from Argentina called Holofote (which means "spotlight"), one on Cher and one on Sonny & Cher (Cher's is entitled, “Cher Super Musa”) and honestly they were too expensive for their size and the very little verbiage they contained (which is all in Portuguese). But for some reason I like them because I like to see how Cher comes across in other cultures. There are 18 pages of photos in each booklet but they are not in any chronological order, which bugs the scholar in me. It looks to be a fan production of "PHOTOS MARAVILHOSAS." 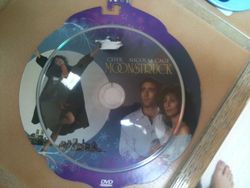 Cher-related Christmas presents included this odd ornament-packaged version of the movie Moonstruck and this button ("Ask Me About Cher") which looks like legitimate tour or label produced Cher paraphernalia. My friend bought it at Rockaway Records in Silverlake and he said it was perfect for my Cher Scholar “duties.” He closed the note with this post script: “All I see is Reeeeeeeeeed.” 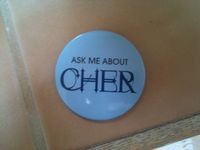 Anyway, I hope you had a good winter break. I came home from Pennsylvania with a cold and have spent the last few weeks hosting out-of-town guests. I’m back in the saddle and ready to blog about the latest Cher bio, Strong Enough. However, I have so much to say about it that I’m going to take it in small chucks: childhood, the 1960s, the 1970s, etc. Can’t wait to get started.

LOL @ brushing your tongue now...and looking forward to your take on what I felt was one of the best CHER books written so far.