Since we’re in the season of big family dinners, it might be fun to bright out the plethora of Cher recipes out there if you’re needing some Cher-themed inspiration for the holidays.

When I was in Junior High, I fell deeply into the world of celebrity self improvement and fitness. This started with Jane Fonda’s book, The Jane Fonda Workout. Christie Brinkley had a good book called Christie Brinkley’s Outdoor Beauty and Fitness Book. I also had Victoria Principal’s The Body Principal, Revlon’s The Art of Beauty and Raquel

Welch’s yoga book, The Raquel Welch Total Beauty and Fitness Program. It was really hard to learn yoga from a book of still shots. Later I got into Susan Powter’s madness. 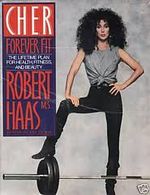 But I can honestly say, the long-awatied Cher beauty book with Robert Haas, Forever Fit, was the best of the bunch. Not only was it the most well-rounded, it was the least self-obsessed. It wasn’t filled with copious amounts of Cher photos and had very balanced and real advice and included a big recipe section of low fat foods, about 58 pages of recipes for breakfast, appetizers, soups, dressings and spreads, salads, sides, entrees, breads and desserts. The book also has a chapter on skin care.

Her later exercise tapes were more interesting for the same reason: she didn’t put herself out

there as an expert, just a student like the rest of us. Although those wacky exercise outfits were nutty! 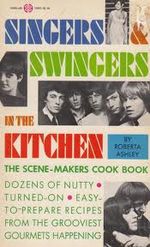 So I always enjoy dipping back into celebrity Cher recipe books and just found another one online: Singers, & Swingers in the Kitchen, recipes to get hung-up on compiled by Roberta Ashley in 1967. Celebrities included: The Byrds, Leonard Nimoy, Paul Revere, The Mamas and the Papas, all the Monkees, Sam the Sham, Leslie Gore, Carol Burnett, The Buckinghams, Paul Anka, the Rolling Stones, Bobby Vinton, Donovan, Herman’s Hermits, Marlo Thomas, The Yardbirds, Larry Hagman, Jane Fonda, Bob Denver, Eva Marie Saint, Bobby Darin, Sally Field, Barbara Streisand, Soupy Sales, Liza Minnelli, Don Adams, Petula Clark, The Supremes, Simon and Garfunkel and some others I’ve never heard of.  It’s a slim 96-page book. Sonny & Cher are in the middle with a pork chop recipe and this intro:

“Sonny & Cher shared a pizza the afternoon they met. That was the day they both had jobs as background singers at a recording session. It’s been Italian food ever since. Cher doesn’t really know how to cook many dishes, but she’s learned a couple to please husband Sonny, who is Italian. At any rate, they always keep a gallon of olive oil on hand, and lots of different kinds of pasta. Sonny always cooks the pasta, and often have it with one of Cher’s specialties.”

It’s good for a game of Catch the PR Spin. Serve with spaghetti

Mrs. Flax’s Fun Fingerfoods was a promo piece created for the movie Mermaids. Although I didn’t love this 1990 movie, I am charmed by this little book of six pages of finger foods depicted in the film, from frozen fruit kebobs to BLT bites. 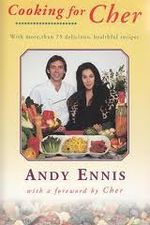 Cooking for Cher by Andy Ennis is probably the mother of Cher recipe books. There are about 200 pages of recipes and includes a section on Cher’s pantry, kitchen equipment and chapters on starters, soups, seafood, pultry, meats, vegetarian courses, veggies, desserts and extra material of Cher guidelines to being lean, a 10 day diet and menus for special occasions.

All books have interesting biographical information and are fun to try, especially in competition with other celebrity cookbooks. I competed directly with a Jack Nicholson fan in Cher Zine 2 for entrees, sides and in a fat-free muffin-off.

I remember seeing some recipe by CHER for "Groovy Steak"…don't remember how it was fixed but the name just stuck in my head cause it made me laugh.