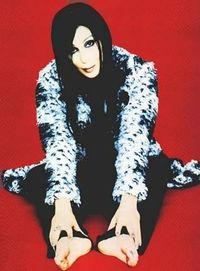 I finished reading The Guardian piece. I found Cher's response comment to Sinead O'Connor about women as sex objects interesting in light of all the Vamp skits I've been watching and their  representations of femme fatales. In fact, in most skits on the shows, Cher characters portray a powerful sexuality. But unlike femme fatals prior, her character always comes out on top (no pun intended). More on that later. Cher also talks about how violence in video games is a much bigger problem (such as Grand Theft Auto), and how although Sonny wasn't a "great statesman," he had the ability to bring everyone to the table, Democrats and Republicans. She also speaks candidly about Burlesque and she elaborates on the Salvador Dali, Sonny and Francis Ford Coppola dinner story.

I also read the Facebook Q&A excerpted on Cher News. She talks about a fun Cher Show halloween party, hints around about her tour's opening act and tells a story about her mom buying art supplies after receiving a tax refund. She says she'd like to perform in the play The Glass Menagerie on Broadway (that would be sweet!) and tells her fans "her imperfections are boundless." But in a Zen equation that also means her perfections are boundless. She also says that if there are fires at the house, she always grabs one jacket she doesn't even like.

Fires at the house? Plural? Who is the pyro in Cher's house? 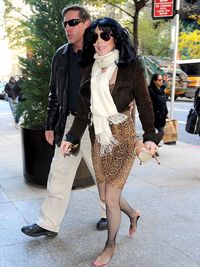 lso in recent Cutsie news (I can't remember the full Cutsie News jingle or I'd regurgitate it here), Cher had foot surgery last week as she mentioned on Twitter. She's probably crutchin-it-up at home. Her friends and fans have wished her get-well-soons. I'm attaching Cher foot photos here for positive foot energies. Take care of your feet,  some Buddhist said. I've seen quite a few Sonny & Cher videos of her dancing around like Mother Nature. I hope she can do this again soon.

Her final twitter wishes pre-surgery were about throwing in the  "Tea-haddists" and she got into a tweet-fight this week with Sarah Palin, a spat that is full of ironies. Cher said thusly:

Sarah Palin posted a response from her brother:

"Dear Cher, I was sorry to hear that you tweeted out such vile comments about my little sister yesterday. It's sad because Sarah has never had a harsh word to say about you. In fact, our grandmother was one of your biggest fans. Have a good night, Chuck"

This is interesting on many levels. First of all, Palin's brother must be working 24/7 to defend his defenseless sister. At the end of the day, if you dish it out, you gotta be able to take it, lady. But at least Chuck's sentences have subjects that match their predicates. His message is condescending in tone ("I was sorry to hear about you," a common bullyish tactic along the lines of "I pity you.") The use 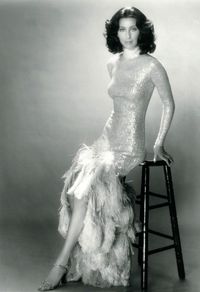 of the words "vile comment" is terribly and comically ironic when used to defend Sarah Palin (who basically traffics in vile and offensive comments). Does Cher care what Palin might have said about her personally? Many of us are not upset about what Palin has said about us personally, but rather what she has said about other people and groups. So that's a pointless point. And finally, he tries to take a jab at Cher's age and hints at her being a has-been only grandmothers were into. This is ironic in light of the fact Cher has been dominating younger acts on Billboard and being invited to appear on the highest-rated TV shows. But conservatives love to throw out this attack at Cher. It defies logic, showing yet again that wishful thinking trumps reality-based thinking. If Cher's such an old has-been, why do her tweets bother them so much? Plus it just sounds weak, along the lines of "nana nana boo boo, stick you head in doo doo."

Read all about it on Cher News. This way you can avoid having to visit reactionary conservative websites, which are the only ones talking about this story right now.

To read for next week: Cher News reports on Cher favorite song list from BBC Radio.

Who is the pyro in Cher's house?!!this made me laugh! LMAO!!!

C99...apologies for the long delay in publishing your comment! I've had to go on moderation due to a plethora of spam of late!