New Cher Interviews & Promos
Cher Signs on to The Voice

It's finally here: http://www.youtube.com/watch?v=JjPWL-23w-w, the first new official Cher video in I Found Some Blog history.

And in honor of the new Cher video, I gathered back together the group of people who attended my Armenian Dinner and Cher Video party for Cher Zine 3. The group includes one Cherfreak (me), a Cher appreciator (C. Crumpet Swank), Julie (a friend from Sarah Lawrence College who likes 80s Cher primarily), Julie’s boyfriend Dave, Mr. Cher Scholar, and Natalie (not a Cher fan and too young to remember anything before “Turn Back Time”). We can't find the woman named Jewel from the party.

Anyway, Swank started things off with some elaborate comments and pictures he emailed me after watching the video.

I actually like this video! Props to her for including such a wide range of women in the video, not just a bunch of attractive 20-somethings. I love the inclusion of the older/old women, the thin/the fat, the tall/the short, the Down's Syndrome girl, the toothy Ruthie, all the different nationalities. Mixing up the bodies in sections also works for me, connecting all the characters despite their external differences. It's a good device that nods to the unity which serves as the premise of the song (even if the lyrics are trite).

It must be said, the opening wig is FANTASTIC!  Very, very cool. It looks best, however, up close when you can see the detail of the newsprint--the colors, typography, etc. When they pull too far away the fact that it is newspaper is lost and she ends up resembling an Armenian komondor: 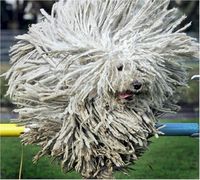 IT'S A WOMAN'S WORLD

I also kind of wish she had headed over to Cyndi Lauper's house and borrowed the True Colors skirt for this video, but I know that Cher doesn't like to look, as Joan Rivers would say, "too matchy-matchy."  A boy can dream though... 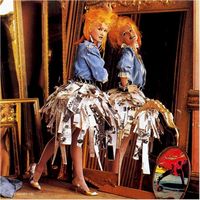 I also like the frizzy orange wig Cher wears--very nice/unexpected/different, and a great match to the Sanctuary style dress. She looks like a gorgeous medieval wench/queen.

Other moments I appreciate:

And my favorite two moments: 1:34/5, the old lady with no rhythm on the right looks like she's having the time of her life, and she looks beautiful and stylish in her cowl neck sweater and black knee high boots; and at 2:19 she reappears with the older sexy bald black lady who looks so fantastic and fierce and rocks her iconic Jody Watley earrings--remember those?

Lastly,  any idea how they make Cher's skin look so flawless in the close-ups?  It seems impossible that she could have such perfect skin at 67.  Is there a "live" version of Photoshop?

I enjoyed the video. It is nice to see so many types of women dancing and being empowered. The sliding body panels reminded me of our childhood toy Fashion Plates. I used to mix my fashion plates with my monster plates to make very bizarre creations.

The point of the video is somewhat blown just by the fact that Cher refuses to age. I agree - she looks great - but if she really thinks all types of women are awesome, then why not allow herself to age? This is kinda like Mary Kay empowering women to be their own boss and go out and unempower other women by convincing them they need a lot of makeup.

I love all her wigs especially the newspaper one, although it’s a bit drag queeny. The song isn't catchy to me and it doesn't have anthemic power.

Loving the paper wig. I would go out with anybody that wore shredded newspaper on their head. But no smoking and forget about blowing out the candles on your birthday cake.

This is why newspapers are better than electronic media. I'd love to be the paper boy on this route, that lucky sonofabitch.

Just imagining what it'd be like in bed after a night of drinking. Kind of like making love in a hamster cage. Love it.

Is that Chelsea Clinton?

Also love the straight red wig. It's like something you'd find in the potpourri section at Michael's. Cut the broomstick off, stick it on your head, and let's shoot this thing.

I think I just saw my mom.

Honestly, I really love this video. I mean I know Cher never saw any of these people and probably green-screened her part in her living room, but it really feels inclusive of ordinary women and people (unlike someone else's video that recently came out).

I also feel like this video and song are primed and ready to become huge hits overseas. It made me want to be a woman so I could be Cher's waist on top of an old lady's legs. Or maybe I could have my face on Cher's chest with Chelsea Clinton's legs.

I noticed there are no Inuit women in this video. Maybe just an oversight, but even still, Cher may have some explaining to do on twitter.

Trying to pick out who from this video will go on to other things...

Think I just saw my mom again. She seemed like she was WAY into it.

I think behind the scenes it's interesting how she can change her outfits so many times again, just like in her concerts, except this time it's other people's bodies.  I thought it was fresh, unique, simple, and I enjoyed it very much.

And she has a marvelous plastic surgeon.  She doesn't AT ALL look plastic, just REALLY REALLY good.

Wow she's "green". Her hair is made of recycled paper.


OMG she looks like a Barbie. Goth Barbie with that eye makeup. Eco-Friendly Empowered Goth Barbie... watch out world...

This is a woman's world? Bouncing boobies? Dancing and trying to look sexy? Seriously?

What animals, plants and minerals were harmed in the making of all those wigs?? Scratch eco-friendly.

I have to say I really like this video. At first I did worry that it was too plain but then I saw Lady Gaga’s video and I’m like, yes…plain is the new interesting. I love most the Cher close-ups. I love the makeup, the eyeliner, the wig. Don’t love the newspaper hair outfit (why is everyone wearing those pants? Are we selling them?), but love the other two ensembles. Cher can do no wrong while wearing big hoop earrings. I love all three wigs, the black and white one, the red one (that can’t help but make me think it’s a tribute to Kathy Griffin).

Cher’s still putting the back of her hand to her face dramatically like a young ingénue. It’s the bent wrist and teeth lick for the 2000s. In the end Cher gets more passionate about the song and that’s when she makes a real connection, (since she’s not doing a Mick Jagger-gymnastic performance anymore). I loved the plethora of female types. I realize there’s only so much room in a video but I would have loved more international faces and cultural outfits (like the Indian woman), and more yoga moves (which kick ass).