BBC News posted this on Sept 4 and Cher looks great in a blonde wig with pink streaks. She talks about naming the new album and how Closer to the Truth was only a working title but she could have named it "Dressed to Kill." Ultimately she liked the ambiguity of 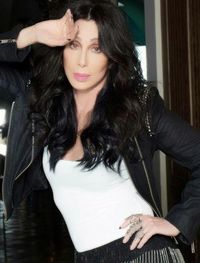 Closer to the Truth.

She talked about her farewell tour not being a true farewell and she said this album changed her mind and that she’s not particularly compelled to be on stage (as 12 years away should indicate). The interviewer told her the new video is mesmerizing. She calls it a plain video, not the greatest ever seen (it did better than most of her videos in my test group), except for the newspaper wig (“everyone has one of those,” she jokes).

She says she only has a finite amount of energy and will have to see if she’s still up to the tour, mostly the changing cities part.

This should be funnier and cooler than it comes off but Jackie Collins has recorded a dramatic reading of the new song "Woman's World:" http://www.chernews.blogspot.com/2013/08/chers-womans-world-as-read-by-jackie.html

It reminds me of when Steve Allen tried to do a dramatic reading of Donna Summers' song "Hot Stuff" on some TV special back in 1980. Maybe hilarious at parties, but not a professional enough joke.

While I was gone, Cher News posted some great information about Cher's new album covers and the track lists. 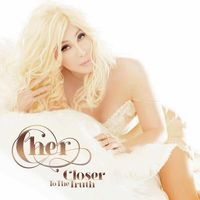 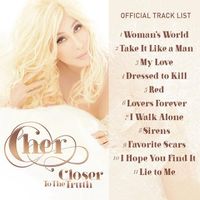 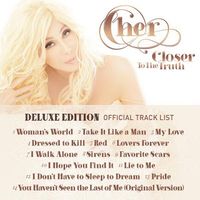 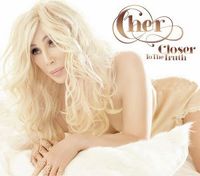 It turns out Target will be selling a Super-Duper Deluxe version with even more tracks. 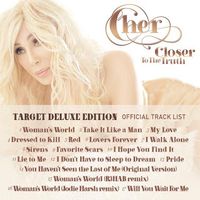 For more information and breakdowns of the track-lists, visit Cher News:

If you are a Cherfreak like me, you will be purchasing all three. Such is our lot in life. 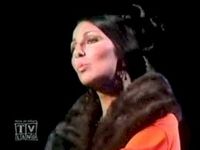 MY MOVE IS OVER. Finally! Geesh.Thank god.

In 1977, I left Albuquerque in the middle of watching The Sonny & Cher Show (1977, age 7). Thirty-seven years later I’ve moved back to Albuquerque at age 44 and am again watching the show by way of TV Land's old airings in a Cher Scholar special request research project to find the Vamp episode that contains “Wine for Caesar.” 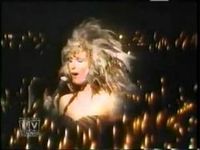 credits of some Cher movies (like Mask) and concert programs. This woman is a brilliant wig artist. I have many favorites re-watching the shows (some are not quite culturally appropriate anymore but that’s another essay). My all-time favorite (started by the prior wig maker on the show Jim Oertel), is the bun made up of many buns. I also love the wig of braids that look like the wig-equivalent of a jungle gym.

50 Years of Cher and Mick Jagger, Cher on SNL While I was on my writing weekend in AZ last month, a friend of mine had the Mikal Gilmore interview with the Rolling Stones from Rolling Stone Magazine (a magazine whose interviews are way shorter and less interesting these days). I woke up before everyone else one morning and read it. Two parts reminded me of Cher’s comments of late:

I’ve been arguing with a friend and Cher appreciator about Cher’s energy level in live performances. I’ve been arguing how unfair it is for him to compare Cher to her younger self. He then brought up Mick Jagger as an example of an energetic performing septuagenarian. I responded, Mick Jagger doesn’t have any feet problems and hasn’t been through menopause or Chronic Fatigue. I wasn't getting anywhere. Thankfully Mick Jagger himself came to my rescue in this article (he also mimics Cher pleasure over what key they’re still singing in):

“When I’m on stage,” he says, “I’m not just singing. I want to do a performance, as well, so that’s waving my arms around and running around, and I’m dancing. That takes 50 percent of your breath power, so my challenge is how to balance that with my vocals. You don’t want to be out of breath when you do the ballads. That’s a  kind of balancing act. I have things that I can do at home for keeping my voice together. I do karaoke singing, and I write songs a lot, and I do demos and sing them. I’m very lucky in a lot of ways, because—I do all the Rolling Stones songs in all the same keys as they always were in, so my higher end is still there, maybe better than it was, because I don’t smoke anymore, and I don’t drink as much and whatever.” (May 23, 2013 issue, p50)

Mick Jagger was also being asked to explain his success and longevity. He has a similar response to Cher's:

“….there has been some toll—though not equally distributed—in the life of the Rolling Stones. But not enough to deter them, or any audience, in the past 50 years. What is it that sustains that appeal? Answers Jagger, “I could say just these things I usually do, but the answer is that you don’t really know. Why do the Rolling Stones endure?  I always say, because they’re successful. Because people still like them. However much we might like to do it for ourselves, if nobody wants to see you, then we probably wouldn’t do it. But you ask me what we mean to ongoing and changing audiences, I don’t know what we 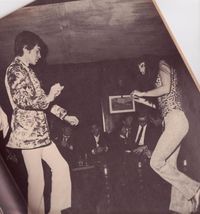 mean. I haven’t got a clue. I do think our sort of longevity adds an extra sort of layer to the appeal. Adding a patina to the piece of old furniture. Because you’ve been around for 50 years, it does add this kind of …this luminosity, if you want. But in some ways, it’s kind of a disadvantage, because then you’re tempted to rely on it, you know?” (May 23, 2013 issue, p 53)

Incidentally, my dream of seeing Cher on the cover of Rolling Stone Magazine is moot. The articles are now truncated to keep up with the bathroom audience; but I still have my Saturday Night Live dream.  I just saw a rerun of Bruno Mars on SNL from last year. He was freaking amazing in so many ways. Cher could so do “a Justin Timberlake” on that show too and be both host and musical guest. She could show them she’s been there, done that and can do it all again in a week. Show the over-excitable divas what’s what.