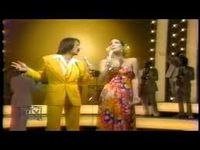 So in Cher's most recent concert, her Caesars Palace show in Las Vegas, she performed a fantasy duet many Sonny & Cher fans had been harboring: she performed "The Beat Goes On" with an old Sonny Bono recording ala Natalie Cole doing "Unforgettable" with her father Nat King Cole. It was sublime. But how can she top it?

I would suggest a the following scene, which is a fantasy I developed just last weekend watching Sonny & Cher perform "United We Stand" on their 1970s television show.

I love their rendition of "United We Stand." It's one of my favorite Sonny & Cher songs because they sang it with legitimate sincerity on the record and in live performances, where they sang to each other with more than typical

conviction. I feel this record really meant something to them, having often felt their backs were against the wall. You still feel their connection in these performances from The Sonny & Cher Show in 1976 and later on The Mike Douglas Show in 1979. (In both peformances, they were already divorced, no less.)

And is there such a thing as a good Sonny impersonator? Isn't it time Cher sang with one? It's not all about Cher impersonators, is it? I would love to see Cher duet with a faux-Sonny (maybe doing "United We Stand").

If impersonation is an act of tribute, doesn't Sonny deserve some mimicking flattery?