You can now preview Cher's album on iTunes. Go listen!

You can pre-order Cher's most recent TV special, Dear Mom, Love Cher on DVD. This comes out September 24.

Cher's interview in V Magazine is out. There's a full spread Richard Avedon out-take from the 1971 Cher album (the Gypsys, Tramps & Theives album) and Cher talks about her duet with Jake Shears, being nervous on stage, how she likes to handle performances on live shows, acting vs. singing, her own idols, twitter, her mom, her family bonds and tattoos. 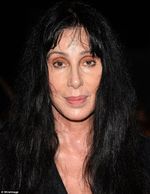 Cher sweats for vets again this year. Read about it on Cher News and Cher World.

Canoe.ca has a new Cher interview. I haven't read it yet.

Cher News reports news that Lady Gaga said on Watch What Happens Live that she pulled "The Greatest Thing" because she didn't think it was good enough for Cher. Well young lady, you should have thought of that before you offered up the song and got the ball rolling. The song has actually grown on me. I didn't think it was interesting enough for Cher at first either. But look at me?

Cher News also has posted an interview with Cher from Gay & Night.