I Think a Song from Cherished Changed My Life 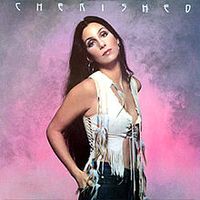 Cherished was the last album Cher did with producer Snuff Garrett in 1977. She was also working with Gregg Allman on a duet album that year and this was the kind of confused personna mash-up that probably occured years later when Cher tried to work on her Vegas shows and her new band Black Rose at the same time. One album personna was gritty, another one was pop.

But if you were 7 or 8 years old when you laid your little hands on this album, you may have loved it as much as I did. I bought my copy, along with Bittersweet White Light and Cher's Greatest Hits (MCA), from a three-dollar bin at our local department store, Styx, Bear & Fuller. I listened to its dramatic story-songs in a constant looping rotation. My best friend at the time would come over and we'd re-enact them all out in our living room where the furniture-sized record player lived. We played the pregnant girlfriend of the pirate, the failed actress, and the groupie.

Flash forward 35 years and the Peter Allen song, "She Loves To Hear the Music" came up on my iPod shuffle. I had a weird epiphany about the song.

I've always felt there are different kinds of celebrity obsession. I'm the kind of Cher fan who collects the stuff. I'm a fan of the product. I never really looked to Cher to model my life after, admire as a hero, or fall in love with. But as a teen I had my share of those kinds of celebrity obsessions. I fixated on a given rock star here and there. With my friends, we'd plot backstage meetings and fantasize about hookups. But I could never carry it through (as if I could carry it through). But even if we ever came close to dumb-lucking ourselves into a situation, something always held me back. Some fact of pride actually. And listening to this Cher song again after all these years, it occurred to me that internalizing this song's story did in fact influence my behavior during these times. 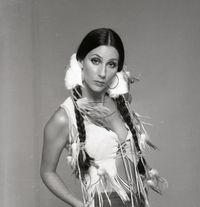 She's just a secretary
at a small recording firm
and when it comes to music
there ain't nothing she can't learn.

Everything she lives and breathes
Is written on an album sleeve.
She can tell you who's hot,
who will make it and who will not.

Hangs around the studios,
ain't a rock star she don't know.
Sometimes they take her home
but she always wakes up alone.

Men that want to marry her
never satisfy.
In the rhythms that she hears
are all that keeps her high.

So they turn around and go
and leave her by her radio.
She didn't love 'em anyway,
not like she loves the men who play.

She's there at every studio,
the first to come, the last to go.
Sometimes they take her home
but she always wakes up alone.

Years will not be kind to her.
Her world is for the young.
Bands that played so tightly and knit
will soon become unstrung.

She'll be just another face,
out of time and out of place.
When the songs revive again,
she'll come to life and tell them when:

She could of been somebody's wife.
Music men destroyed her life.
Each night she took one home
but she always woke up alone.

What a crazy lady, I thought when I was eight years old. I knew then this girl was ultimately a loser, in many ways. And she scared me. Who could throw themselves at a rock star if that legacy was looming over you? Not me.

I was conflicted about this for many years. I remember the day I decided to give up lusting after rock stars. I was in my shower feeling more tired than sad. I said to myself, today is the end of it. I started really looking at the men I was dating as real (and interesting) people after that. I met a string of quite amazing and facinating people before finding Mr. Cher Scholar.

I've seen, since then, how "bands that played so tightly knit" have in fact "become unstrung." Rock stars have come and gone with such unbelievable regularity that it makes the Cher phenomenon seem a bit bizarre.

Peter Allen was a great storyteller and the sentence structure of his lyrics: very bright. But I like Cher's version of this song better. Her voice brings the kind of authority the story needs.

Posted at 12:35 PM in History, Music, That's The Obsession Talking, What This Really Says About Me | Permalink | Comments (0)