And Then There Was One (RIP Karen Black)
Album Pre-Reviews, Appearances, Gossip

Another Day of Breaking Records and Defying Time 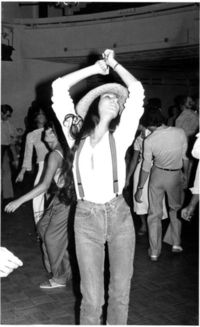 Cher must be doing a jig these days. She's breaking hearts and breaking records. Here's a long note from my Billboard-watcher friend Christopher. Happily, it came on my birthday, July 31:

"She did indeed do it. "Woman's World" strides onto the throne of the Billboard Dance (Club Play) Chart this week. What it means for chart-lovers and Cher-lovers:

- Her 12th Top Ten song on the Dance Chart.
- Her 8th Number #1 on that chart (her first was "Believe").
- With "I Got You Babe" hitting #1 in 1965, it gives her a span of 48 years between first and most recent #1's on various Billboard charts, an achievement all the more remarkable insofar as the recent #1 represents a new recording and not a greatest hits collection. I haven't done the research to ironclad confirm that this is THE record for #1 longevity, but I would bet your Cher make-up head on it.    The only active recording artist who has a realistic chance of catching/matching her is Barbra Streisand: her first #1 is the People album from 1964, her most recent, "Love is the Answer" (also an album) in 2009, a span of 45 years. Cher's last #1 hit (also from the Dance Chart), "You Haven't Seen the Last of Me," is from 2010, which, at the time, matched Babs' 45 year span. With Woman's World, Cher now has the record all to herself.

Some may argue that Barbra's achievement is more substantial, given that the #1's forty-five years apart represent albums on the mother of all charts, the Billboard Top 200 Albums, while Cher's #1's forty-eight years apart are for singles (and the most recent on a niche chart, at that). I in no way wish to minimize Streisand's amazing feat (no other artist--male, female or group--has ever had such a span between #1 albums), but let's keep in mind too that the singles charts reflect a certain degree of au courant hipness that is impressive in its own right. Whereas album sales might more accurately reflect support from a single demographic that has aged along with the artist, I think it's pretty safe to say that the people who purchased "I Got You Babe" in record stores in 1965 (on vinyl only, of course) are not the same folk dancing to and requesting "Woman's World" in the dance clubs of 2013. As has become her signature, Cher has thoroughly defied time once again.

Lastly, it bears repeating that Cher has had #1 songs on Billboard singles charts in SIX (!) different decades:  the 1960s, 1970s, 1980s, 1990s, 2000s, and the 2010s. She had already extended the run into a sixth decade with "You Haven't Seen the Last of Me" three years ago, but it is such an astonishing achievement that it should be mentioned again. Moreover, these #1 hits come from the fields of Pop, Adult Contemporary, and Dance, further demonstrating not only her cross-generational appeal, but also her cross-genre prowess. For this six decade "#1 singles streak" record, she truly stands alone. To match it, Madonna, who is in second place (with #1 songs in four different decades), would have to notch a #1 song between 2020 and 2029, and yet another in 2030 (at which time she would be 72 years old) or later. Even though Madonna remains, arguably, the most successful singles artist in the history of popular music, I have my doubts she can catch Cher on this one."