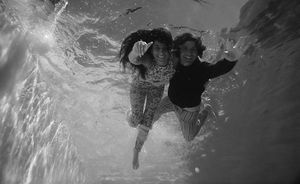 So it's summer here in Santa Fe (obviously) and we've been going through a nasty heat wave that broke a few days ago. Just came across this picture of Sonny & Cher in their pool from an early publicity session. Love this picture on so many levels, least of which because I'm hot and don't have a pool handy.

CherNews and CherWorld have been posting some good stuff in the last few days. Tomorrow is single release day for "Woman's World" and she will sing on The Voice tomorrow night. She will also be doing a LiveStream interview before The Voice at 6:15 PST: http://new.livestream.com/cher. Apparently, You can ask questions for this special event by sending them directly to Cher on twitter by using the hashtag #Cherlivestream.

CherNews also culls from Cher's tweets that the failure of Lady Gaga's "The Greatest Thing" duet had more to do with Lady Gaga not liking it than Cher. Producer RedOne was set to redo it as a solo track but "dropped the ball," went "MIA" and please direct your ire at him, tyvm. According to tweets, the album will have 11-16 songs (sweet!) and there are duets with Pink and Jake Shears and a mystery duet on the album.

Of course I have many fantasies concerning Cher's mystery duet. In fact, I have fantasized about an all-chick duet album with Cher as a feminist version of all those insipid Frank Sinatra and Tony Bennett duet albums. I also fantasize about a John Waite duet and more Tom Jones duets.

CherNews also reports that Cher and William Shatner are sharing friendly tweets which is sooo awesome because it is another fantasy of mine to see Shatner interview Cher for his Raw Nerve show (if that show is even still running). His interview questions are so much more interesting than anyone elses.

Believe me, the Cher-duet-interview-fantasy factory is alive and well here at Cher Scholar Institutes. Oh and Cher expressed interest in fellow Ellen Show guest Theresa Caputo, saying she reminded Cher of Sonny's mom and other loud and lovable family members of his. I keep getting Caputo (the Long Island Medium) confused with psychic Kim Russo who does The Haunting Of..." show with celebrities. I've never thought about it before but a nice new Cher fantasy would be to see her appear on Russo's show so we could continue to connect with Cher's long lost loved ones.

Cher keeps on cookin' out there.

CHER and ELVIS DUETs!!!!
sort of a
like Natalie Cole and her dad
or
Hank Williams, jr and his
dad.