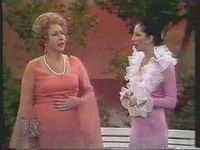 Not only did Jean Stapleton appear on The Sonny & Cher Comedy Hour but she sang with Cher when Cher guest-hosted for a week on The Mike Douglas Show in 1979, the same episode Sonny was on. On that very episode Jean said she loved appearing on The Sonny & Cher show because they wrote sketches to let her be who she felt she really was.

However, their duet on the show was not quite so pleasant. Jean did a full Broadway treatment of the song "My Buddy" and Cher did her usual hip Cher version of the song and the two did not mesh. Unfortunately I can't find links or pictures of them together on Mike Douglas.

I did find this clip of Jean Stapleton's work on the early 1970s Sonny & Cher Comedy Hour hamming it up.

I'll miss Jean Stapleton. And sadly, I feel like she's died twice, the first time when they killed off Edith's character on All in the Family.