So while we're cooling our heels waiting for the new Cher single to be released this month, I came across some good video of Cher on the UTubes.

I caught up with a whole array of Cherness on CNN:

- Cher on Larry King (1999) circa "Believe," Tea with Mussolini and discussing Sonny's funeral (part 1 and part 2)

- Footage I hadn't seen about Cher's single with Eros Ramazzotti (2001); how they came to make the record together

- Cher calls CNN to talk about Hurricaine Katrina, feeling the same helplessness we all did but with some extra money to help out (2005).

- Cher calls CNN to talk about the death of Michael Jackson (summer 2009) and her experiences working with him; how hard it was to learn the Jackson Five dance for her Cher TV show, how Michael loved her beaded socks.

- Cher continues to talk that night about Farah Fawcett (summer 2009). "This chick was holding on to thin air and still had a great attitude."

"That's Cher! [John laughed at the beginning because in French 'Cher' means both 'dear and, in 'slang, expensive... so it sounds like the little girl is exclaiming "That's expensive!"] The doll with long hair; the doll with elegant clothes, that doll that you can braid, wardrobe for all occasions. Thirty-two ensembles sold sseparately. Cher is sold with everything on the screen. Cool! [John was confused by the accent over the very last word which he guessed it meant divine or wonderful or cool.] 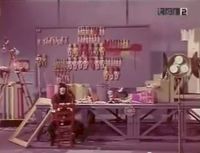 - Cher peforms (circa 1966) "Mama" with all those creepy dolls at what looks like a staged doll factory. Far from being creeped out, Cher looks pretty blaze about it all.

Although Cher did video for her 1978-9 Take Me Home shows, the big opening video I remember is from Heart of Stone tour. It's fuzzy but you get a sense in the jump in polish from concert videos made from 1989 to 2008. This opening is just a collage of clips as opposed to a remix of music and clips. The first video opening at Caesars Colosseum.

What's great about these openings (whatever version they take) is not just how well they familiarize nonfans with Cher's 4-decade oeuvre, but how much excitement they build up before Cher makes her entrances.I love how the second one is a lovely mashup of "Believe," "I Got You Babe," "Dark Lady," Gypsies Tramps and Thieves," "Song for the Lonely" and "The Beat Goes On."

- Sanremo (Italian) interview with audience from 1999.

As a Frenchman, I can confirm that the commercial you posted is indeed Canadian. That accent is not french.
Is Cher aware that homosexuality has absolutely no recognition by the russian law ? Does she know even the Gay Pride is forbidden there, that gay people get beaten up by policemen for just walking down the streets hand in hand with their lovers ? I hope she knows that.