Of course I took copious notes on the recent Cher special, Dear Mom, Love Cher (see the promo commercial here). But before I attack that information, I want to review all the press coverage for the special.

Of course the big bombshell of the entire buildup was the reveal of Cher's preteen mugshot for being arrested for stealing a car. Cher has told the story many times over the years, how it was basically a misunderstanding. But never have we seen this mugshot!! I am literally dumbfounded no media like TMZ has ever located this! I mean mugshots of celebrities have their own websites! And this is Cher we're talking about!

When my parents were driving out to attend Mr. Cher Scholar's graduation, my mom grabbed a copy of Cher's interview in USA Today with Edna Gundersen (total Fargo name). Cher talks about how the special started from a 16 minute video she made for her mom. This quote seemed significant: 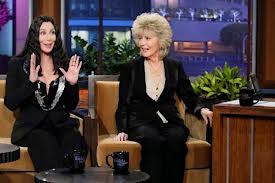 Cher and Georgia appeared with Jay Leno on April 30th. I loved Cher's jacket and hair wave. Georgia seemed somewhat frail and quiet. Cher talked about being the only dark one in her family. She also described putting all new music to Georgia's old vocal tracks. 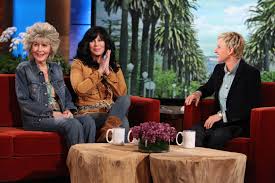 Cher, Georgia and Georganne appeared on Ellen on May 1st. Ellen said Cher has sold over 275 million albums.

I love, love, love Cher's wig on this episode and felt Georgia was more animated in her jean jacket on Ellen.

Georganne and Cher talked about how Cher was always the odd one in the family and how the album project went big when Cher got involved (because Cher can't do anything small). Cher and Georgia lip synched a performance of "I'm Just Your Yesterday." Then Ellen gave all three women cowboy hats and you know how coo-coo I am for Cher in cowboy hats!!

I thought Cynthia McFadden was going to interview Cher's family for the show Nightline and I taped about three nights of shows without finding it. Luckily CherWorld posted a clip of the interview McFadden did for Good Morning America. 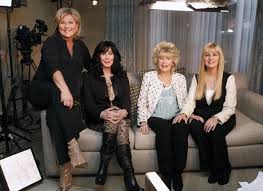 I have my love-hate relationship with the softball/hokey questions of Cynthia McFadden but I have to say this was my favorite interview for this TV special.

Cher and Georganne talk about how pretty Georgia was but "she didn't even know it." Cher talks about the kind of Everly Brothers harmony she has with her mom. 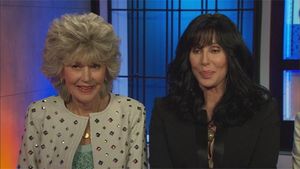 Also from Cher World, another interview with the same outfits (press junket?) but a different interviewer. Shaun Robinson asks Cher about NBA player Jason Collins coming out. I love how Cher handles this question, with gentle dismay. This tone goes a long way. Again Cher's not being pissy or defensive but still venting frustration. Brilliant. Cher talks about how archaic it is to be still debating issues of sexuality. She asks, "How long do you have to wait to be who you are?"

In other news: I'm very thrilled to report that today my book, Why Photographers Commit Suicide, was named as a finalist in the 2013 National Indie Excellence Awards!! Whohoo!!