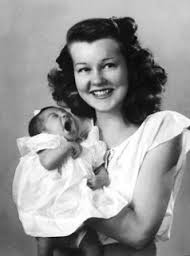 I've listened to Honky Tonk Woman, the new album by Cher's mother Georgia Holt, (at left the two of them first photographed together in 1946), three times now. These were lost tapes from recordings made in 1980 with the Elvis Presley band. Cher's current band refurbished the tracks and helped Georgia to release the album last month.

I love the country feel of the cover. I downloaded the album from iTunes and so haven't seen what any inner CD packaging or recording details there might be.

I'm Just Your Yesterday: I can understand how Georgia would want to interpret this song in a mother-daughter duet. On the TV special, Dear Mom, Love Cher, neither Cher nor Georgia could remember recording the song. So this is Cher singing circa 1980? The Black Rose era? That would be incredible. I thought this was a new recording and I keep listening to it in order to catch clues to properly date it. Cher's vocal style has changed over the decades and I'm stumped as to why I can't sort it out. It doesn't sound like 1980s Cher. I love the harmony between Georgia and Cher and although they sound similar, (especially singing vowels like Ah and Ohs), Georgia's voice is very clean and neat. Cher is notably more earthy. 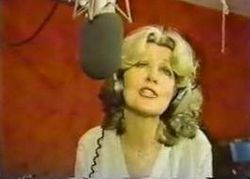 I Sure Don't Want to Love You: I'd love to know who the writers were for these songs. A lot of them invoke "Daddy" which carries all those connotations of Fathers, Sugar Daddies and Honky Tonk Daddies. Definite barroom feel to it. 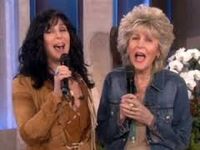 Las Vegas Blues: I didn't love this one. According to the short-lived Wikipedia page about the album, Georgia wrote this song. But it sounds too Vegas-hokey for me. More Daddys in the lyric. And unlike Cher, Georgia's vocals can get overpowered by the band.

I Bought the Love Love That You Gave Me: Great title and although this didn't stick out for me, I appreciate its honky tonk torch-like quality.

I Wonder Where You Are Tonight: This one seemed off the rails for me. A dissy up and down quality yet a little lackluster. Too enunciated and we need more crying in the beer.

Love Me Tender: This is one of my top two favorite tracks on the whole album. Georgia shines doing a simple ballad that seems tailor-made for her. The backup vocals warm up her sound. I strain to hear Cher doing backups but I think she's there. I love that Cher is doing backups for her mom.

Homecoming Queen: Interesting in a faded-flower kind of way. And Georgia sort of owns this one with her lady-like demeanor and her hard-times-in-Hollywood persona. Allegedly Georgia wrote this song as well and I like it much better than "Las Vegas Blues."

Cryin' Time: My very favorite track on the whole album. Not just because  Sonny & Cher did the song as a single circa 1966 and it was included as a bonus track on the 1999 re-release of The Wondrous World of Sonny & Cher. Not just because you can really hear Cher doing backups strongly on this track. But because Cher and Georgia really sound great together here, better than the duet even. Also, the song is a more twangy country selection that seems like a happy compromise between Cher and Georgia's voices. I love it!

While listening to the tracks, I thought a lot about mother and daughter vocal differences. About genetics in vocal chords. About learned performance and what it says about the cultural time during which each woman developed her vocal style. Why one succeeded and the other did not. Beyond perseverance, beyond talent. Georgia's voice is pretty. Cher's voice is hip. Georgia can sing in a more "professional" manner but Cher's can emote.

I played the album for Mr. Cher Scholar who was a young 1970s country fan growing up in Kansas and is a current alt-country aficionado. He loves Mike Stinson and we've just discovered Stinson's 1960s alter-ego Sonny Throckmorton. We've been watching all the old RFD country shows like The Porter Waggoner Show, Pop Goes the Country (which I LOVE), and the awful Nashville on the Road. I swear Jeannie Kendall of The Kendalls is doing a Cher impression every time I watch her Pop Goes the Country appearances.

I was having trouble placing Georgia's delivery style. At first he said her songs sounded like Nashville pop of the 1970s but then he decided that the songs had more of a 1940s/50s country sound and that Georgia most reminded him most of Norma Jean, the original girl singer on The Porter Waggoner Show (before Dolly Parton arrived). Singers like Patsy Kline, Kitty Wells and Norma Jean had a very toned-down delivery, almost bland-sounding judging by today's sparkle and belting.

Mr. Cher Scholar and I talked a lot about Cher's "it" factor and what the heck that was. Cher isn't so neat with her notes after all. But fame requires an act of salesmanship (even Sonny would tell you), what many call sincerity or authenticity but what I prefer to call "soul," a kind of cool polish or (in the case of someone squeaky clean like Doris Day or Karen Carpenter), selling yourself as the genuine article (hip or square). Mr. Cher Scholar thinks it's a package of many variables that work together to create charisma.

Cher.com has some great artwork posted about the album. By the way, Cher.com is looking much better! Check out the browser tab title logo! Is this what Cher meant when she mentioned her new blog? It sort of reads like a blog.

And The Huffington Post talks about how the new album has charted. You can buy it on iTunes or CDBaby.

1. I don't hear cher in the backgrounds. Georgia had her own people on the mike douglas show.

3. I think Georgia sounds like that sub-group of women in country whom were famous and had hits--BUT,
never held the spotlight
like their other comtemporaries in the '60's/'70's.
That sub-group would have been like
Billie Jo Spears and
Donna Fargo.
BUT, I think Georgia REALLY, REALLY sounds a lot like
Dottie West.

4. Georgia would have been
GREAT as a regular on
HEE-HAW!!!

5.Have you tried watching
the old Wilburn Brothers country show, when, Loretta was their "girl."
Before, she sued them to break a lifetime contract and go off on her own?

6. Try HEE-HAW.... It is a great mix of true country singers and Grand Ole Opry
stars.

7. I hate todays so-called
"country singers and their music."
It is not country. It is a bunch of people whom want to be rock/pop stars-- but, will never have that kind of career. So, they
do their best to fulfill that dream in country music.

8. Jesse Colter ----just because I love her. I always considered her the cher of country music in the '70's because, she was never accepted. she sang off key. and, like crystal gayle... she crossed over to the POP charts. that was frowned upon then.

Cher is definitely in the backing vocals of Crying Time. Cher said they redid everything but Georgia's vocals for the release (on The Tonight Show). I love Donna Fargo's song "You Can't Be a Beacon if Your Light Don't Shine." Good insight about Georgia and Dottie West. I agree with you about today's country....Mr. Cher Scholar says "country today is just recycled rock music from a decade ago."