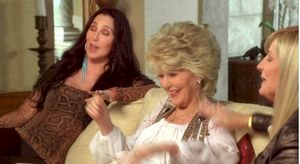 Extra has posted a clip of the upcoming Dear Mom, Love Cher special.

Is that the top Cher wore for the cover of The First Time book? 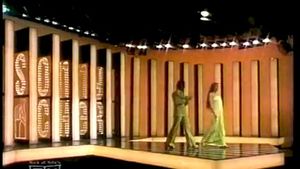 Cher scholar Robrt Pela sent me the link to this clip, S&C during their second show singing "Put a Little Love in Your Heart" which is atypical because its breakout segment (the annoying thing the second show did to break up the opening song) contains the full clip of their blooper reel introducing Raymond Burr. The clip is significant for many reasons. First, you get to see Cher in one of her glamour outfits somewhat (but not really) hiding the fact that she's pregnant with Elijah. This is maternity dress ala Cher, which is very jiggly. Is it me or do we need to get that woman from Witches of Eastwick to complain, "She's not wearing a bra."

Secondly, it's also a very slick example of the high style of Sonny & Cher from their later show, The Sonny & Cher Show, after they were divorced. It's polished, smooth and more colorful, which I guess is something audiences of the time didn't like well enough.

You might have seen the blooper reel before. It's been on the Internets for years and before that was a staple of Dick Clark's blooper specials of the 1980s but in those versions the segment is edited farther down. It's funny to see the longer clip and the poor girl trudging in and out of frame with the take slate. You even hear the director over the loudspeaker complaining about how much the bloopers are costing the show.The absolute penultimate moment, however, is the point where Cher loses it and lets out her wild crane laugh. Sonny then follows with his mafioso crane version.

While perusing those I found this clip of Cher on The Tonight Show with guest host Joan Rivers from 1983. I hadn't seen this before. She's just been nominated for a Golden Globe for Come Back to the Five and Dime and she talks about dating an un-named 23-year old, getting serious about acting, her workouts, selling the Egyptian house and moving to New York (this feels circa Tom Cruise to me but it was sketchy then, those New York days) and she introduces a long clip from Jimmy Dean. The interview is funny with Joan at her best, teasing Cher for knowing everybody, including Henry Winkler who is sitting next to Cher. Cher is growing out her Black Rose shag.

Tom Cruise came after Val and before Joshua...