This was the last weekend for Cher co-hosting TCM's Friday Night Spotlight in April. This week's theme was Women Taking Charge.

The Great Lie (1941) stars Bette Davis, Mary Astor and George Brendt. I've now seen 37 Bette Davis movies. In high school I went through quite the Bette Davis phase and checked them off in a list in the back of the Lawrence Quirk Bette Davis biography Fasten Your Seatbelts, which was a better book than Quirks biography of Cher. My favorite Bette Davis movie is The Petrified Forest but I also loved Dangerous, Marked Woman, Jezebel, Dark Victory, The Old Maid, All This and Heaven Too, The Letter, Mrs. Skeffington, A Stolen Life, Phone Call From a Stranger and many more. I am so attracted to Davis' preciseness and surliness. She's a very engaged actor and I love to watch her in the process of thinking, hatching up a scheme. So different to what I love about Katharine Hepburn, her joie de vivre, her wild uncatchable being as a character I wanted to become.

Cher and Robert Osbourne talk about how Davis fashioned for herself an understated part, how George Brent was a sturdy leading man. I hadn't seen this movie yet and I loved it. Had never seen Mary Astor in a movie and loved her bitchy-star performance. The movie has some great lines like "I'm tired of being your haven," "Dates bore me" and my favorite, "Supposing you go!" The sets are crisp and neat and the story is a battle of the wills between Davis and Astor. The script is smart and understated and the women repeat each others' lines with implied venom and double entendres.Themes involve work vs. marriage, country vs. city, and gender bending in the Arizona scenes where Davis dresses like a man and paces outside the birthing room like a new father. This is a weird time when pregnant women aren't allowed to eat pickles or ham. There are great, stark shots of the southwest.

Bette Davis is always good for the angry line, "Yes...I see" and I can't help but think she has a Madonna face. Or maybe Madonna has a Bette Davis face. The black servents have some good lines but they live to serve and are treated like children. Maybe this is how it was but it deserves a tsk tsk mention.

Davis makes herself vulnerable in the movie when she makes the great lie and Astor when moves in for the kill. By the end, the characters are fully cut enough that you can see both sides.

Cher says she's not a fan of Mary Astor and they talk about her range, from this movie to the mother in Meet Me in St. Louis, Cher remembers, stirring tomato sauce. 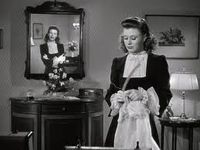 Kitty Foyle (1940) - Cher has won me over to the charms of Ginger Rogers but not always to Ginger Rogers movies. Cher appreciated this movie for giving Rogers a serious role and Cher acknowledged that comedy is more difficult than drama. This is a story about a woman hung up on a rich man but too proud to accept his family's requirements of finishing schools and social events. I actually felt sorry for the rich guy in this movie. He did try. Her doctor beau is salt-of-the-earth by comparatively manipulative. The effect of having Rogers talk to herself in the mirror felt too much like a comedy effect but I appreciated the discussion about Cinderella stories with Rogers and her father in the beginning, the thrill of the Franklin Roosevelt election in play, and Rogers' hilarious condescending affectation as a perfume seller. I notice there have been four movies this set with department store locations and I'm always reminded of Cher working one of her first jobs at Robinson May in Los Angeles. The movie is a bit of a soap opera and although Rogers won an oscar for it, her performance in Tender Comrade was more dramatic.

Cher thought Dennis Morgan, the rich boyfriend, was too fluffy and "couldn't hold William Holden's coat." I agree. He looked too Guy Smiley for me. She and Robert Osbourne talk about how much more adult the novel of this movie was (with abortion and other topics) and they discuss the movies Rachel and a Stranger, Stalag 17 and Sunset Boulevard. 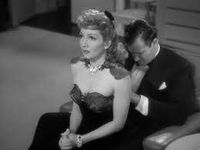 The Palm Beach Story (1942) - I'm on the fence about this one. It was a sweet and funny Preston Sturges movie. I loved seeing Claudette Colbert playing a sassy, sexy blue collar lady in comparison to her prim war movie roles. Mary Astor was also good as the nutty sister (a far cry from her performance in The Great Lie). Cher and Robert Osbourne talk about George Sanders and Cher forgets his name although she starred with him in her first movie, Good Times.

The movie opens with a great stop-frame sequence and clips along through crazy situations on a train, a boat and in Palm Beach where the Rockefeller-type character, John D. Hackensacker, lives with his sister. Cher loved the scene where Rudy Vallee wardrobes Colbert at a department store and calls it a "girl moment." The movie hit somewhere between funny and silly and I can't quite place it.

After the movie Cher said she enjoyed comedies but would like to do dramatic things too. The Women (1939) - I've been hearing about this movie for a while and I'm glad I finally saw it. Typical with MGM, the long opening made a long movie even longer. Norma Shearer, Joan Crawford, and Rosalind Russell were all very good. Crawford played a pitch-perfect gold digger and Russell was the bad-friend comedy foil. Cher liked the movie for representing every type of woman. She says it would be impossible to get together such a star-studded cast these days. Even Ma Kettle, Margoire Main, makes an appearance in the Reno scenes.

The movie is full of girls and dogs. Not a single man appears in the movie. Like Cher, I loved the gossipy manicurist character. I also appreciated that every character had something really right to say about men and what Shearer's character should do when forced to deal with her husband's infidelity. The movie let every woman be a little right and a little wrong, from Shearer's mother to her catty friends. Although so many women here hurt by wandering husbands, the movie presented the most sage advise from the point-of-view of the Other Women, Paulette Goddard, who steals the husband of Rosalind Russell. Even Russell has a right point of view from time to time. The best scenes are when the original mean girls come out and scratch their claws. The Reno bitch fight was great. And what a weird scene of exercises at the spa with Russell! This movie was also our tear jerker of the week, definitely an over-the-top, girls-only, chick flick.

Cher liked the colorful fashion show sequence but Robert Osbourne didn't. I wished today's runway shows were more animated and staged instead of the dead-pan boring strut-fests they are today. Cher talked about her special with her mother coming up (and how her mother's album songs were first cut with Elvis Presley's band) and how Cher and Georgia planned to sing a duet on the Country Music Awards (it didn't happen, the awards were early April).

My favorites of the series by week were: