The Agony and the Ecstasy of Phil Spector
Video Fun: Old and New

I really enjoyed this week's set of movies for various reasons. What a refreshing reset from the depressing war movies last week.

His Girl Friday (1940) - I've been hearing about this movie for years but had never watched it. I've been telling everyone how great it is since Saturday. Rosalind Russell plays the ex-wife of Cary Grant and she's getting ready to marry Ralph Bellamy (who you will remember as Randolf Duke in Trading Places). Cher, dressed in a suede Indian inspired outfit complete with turquoise and feathers, describes loving the quick dialogue, the Robert Altman-esque talking over one another, commenting "You can't beat it with a stick." Cher said, "a lot of actors, and I'm one of them, couldn't memorize all that dialogue."Cher talks about the technological difficulties in catching all the dialogue with a boom and how nobody was better or more graceful, ironic, sharp, sweet and vulnerable than Cary Grant. Robert Osbourne says he never showed he knew how great he was.

The pace of the movie is exciting (still to this day) and I loved seeing Russell excel in her job as a cut-throat journalist who all the boys admired for her skill. She's really good at what she does but longs for human agency. Instead of being treated as a piece of meat sexually, she's treated like a piece of meat vocationally. Cary Grant winning back an ex-wife is a joy to watch (see The Philadelphia Story) and Russell works hard to outsmart his corrupt machinations.

The dialogue is tight, witty and layered with strategy and narrative. Fear of communism drives the corrupt politicians who engage in trying to manipulate the press and make a hilarious attempt to bribe the governor's messenger. The movie also shows the role of a newspaper in saving people's lives and how cavalier and cynical newspapermen can be about it. At one point Grant, the publisher of the paper Russell is working for, is scrapping headlines but says, "Leave the rooster story. That's human interest." All the newspapers in town are covering a trial and execution but they are all telling radically different stories. So little has changed. The prisoner scene will remind you of Silence of the Lambs and there's a meta moment when Grant describes how to locate Ralph Bellamy telling someone, "He looks like Ralph Bellamy, that fellow in the movies."

Robert and Cher lament that Rosalind Russell gives up her independence at the end. I find it ironic that independence for her means quitting her job and becoming a "real woman," a housewife. Grant's sabotage of her plan feels just as oppresive as if he had refused to let her go to work in the first place. Grant's character doesn't evolve much sadly and Russell finds herself in the same inadequate situation from which she started. Still, a must see movie. 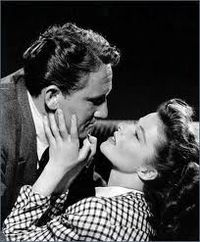 Woman of the Year (1942) - In college I used to frequent a video store attached to Schnucks grocery store. Unlike Blockbuster, where they tried to make you pay 3 dollars for everything, Schnucks rented older movies for 2 dollars and had a big classic section for 1 dollar a night. I watched every Bette Davis and Katharine Hepburn movie they had which included most of the Hepburn/Tracy movies.

I loved seeing this movie again and was surprised that my sympathies had changed this time around. When I first watched it, I hadn't been in a long-term relationship and I sided more with the Tess Harding character. I resented Sam Craig's stomp on her flowery personality. I had the opposite reaction this time, seeing Sam's point of view. He's a hapless outsider in their marriage and Harding never makes the basic sacrifices he is willing to make to spend time together. She never considers him with the same deference that he considers her. Ultimaely she reads as self absorbed. Craig is fighting for equality and not dominance. But through the lens of the 1940s, this means Harding will at some point try to make him breakfast. This plays out in the movie's most famous scene. Inspired by the film, I made Mr. Cher Scholar eggs the next morning, saying "See? Aren't I being wifey?"

Cher and Osbourne talk about stylized acting, how Hepburn never changed her style for a role, how Cher's favorite Hepburn movie is "Out of Africa" (Mine are "Holiday" and "On Golden Pond" which is cheesy but I will defend it in a long essay if I have to). They talked about chemistry between Tracy and Hepburn. Cher commented that chemisry was unquantifiable, like having "it."

The movie slightly skirts issue of class and highbrow vs lowbrow pursuits, Harding's column of politics and her knowledge of other cultures and languages versus Craig's work as a sports columnist. Craig makes fun of foreign languages because he's "All American." Harding has a male secretary (who reminds me of Project Runway's Tim Gunn) and who is represented as subtly emasculating. Reading his character with my 2013-eyes, I found him to be very funny.

Like His Girl Friday, I enjoyed watchign Hepburn as a woman at work and doing a bang-up job, eventually becoming Woman of the Year. The movie showcases Tracy and Hepburn at their best: flirty and explosive. The bar scenes are great. There's an interesting scene when Craig first comes home with Harding and the taxi driver asks if he should wait. There's an uncomfortable hesitation before Harding rescues him with, "You can get another cab later."

Soon after Harding is named Woman of the Year (hurting her husbands feelings by telling reporters the award is the most wonderful thing that has ever happened to her), all her insiders start to question her choices to some degree, her Aunt, her husband, her adopted son. The movie, in 1940s fashion, skates over the line a little, asserting that Harding isn't a real woman at all (how can you not be a woman as a woman?). She's too much of workaholic and not maternal enough. But in the end, the movie asks only that she lead a well-rounded life. 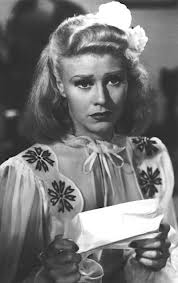 Tender Comrade (1942) - Here is a Ginger Rogers movie about the wives of soldiers who become roommates to save money during World War II. Although Ginger Rogers is adorable as always (Cher has completely won me over on this point), this is more of a war movie than a working girl movie. There is one short collage of scenes early on where we see the women at working as drivers and welders at Douglas Aircraft in LA. The rest of the scenes are flashbacks showing the courtship of Rogers and her husband and scenes of the girls in their rented house, all of which is interesting but I loved the theme of the night: seeing women handling work situations.

That said, I did appreciate seeing this movie in the context with which Cher and Osbourne described it, as being overly patriotic and one of the movies President Roosevelt requested Hollywood to make during the war, but the one movie that got the brunt of anti-communist criticism afterwards, during the McCarthy era, for its title and its director and writers being accused of sneaking in communist propaganda into the film.

I watched the movie with that in mind. Ginger Rogers and her friends decide to run the house "like a democracy." Everyone has a vote. They meet their future housekeeper who talks to them about how "they're all in this together" and the women decide to pool their money for expenses and give the rest to the housekeeper as a wage. To crazed, paranoid anti-communists, I can see how this could be misconstrued as a commune, a communistic relinquishing of profits and property. But really, what an afront to free speech in the end. The movie finishes with the most patriotic speech by a war widow you can ever imagine, Rogers crying over her baby, telling him that his father died in battle "so you could have a better break than he had." (The baby's going to grow up in a commune.)

But the movie is a nice slumber party, good for funny phrases like "Holy Mackerel" and "Judas Priest!" The title Tender Comrade actually comes from a Robert Louis Stevenson poem called "My Wife." The LA landmark restaurant on Hollywood Boulevard, The Pig and Whistle, is also mentioned in the movie.

Cher talked about loving Ruth Hussey in the film and told the story about how her mother originally had Marilyn Monroe's part in Asphalt Jungle. Cher said her mother loved old movies (which weren't so old when Cher was little) and has watched them with Cher since Cher was about 3 years old.  Robert thanked Cher for instigating the Friday Night Spotlight series. 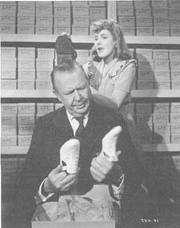 The Devil and Miss Jones (1941) - So of course when I try to find pictures of The Devil and Miss Jones (1941), I pull up a bunch of Internet photos of The Devil in Miss Jones (1973), which is incidentally the first porn movie my high school friends and I ever got a hold of. So it was nice to see the movie who's title inspired it. Gene Arthur and Charles Coburn play co-workers in the shoe department of a department store. Cobern is actually a spy, the owner of the department store and the richest man on earth. He's trying to repress a budding union movement there.What a pleasant choice considering Cher's twitter activism and the history of the 99 percenters.

Cher didn't mention any political reasons for choosing the movie but said she loved all the actors in it, liked the love story between the older actors (Charles Coburn and Spring Byington) and loved Jean Arthur's voice. Incidentally, we just saw Coburn playing David Niven's very funny father in Bachelor Mother. The chemistry between Arthur and Coburn carries the movie. A good story to watch in driving home the point, again, that we're fighting all the same battles we were in the 1940s.

At the end of the night, Cher talks about the TCM conventions and their boat cruise and how she has the channel on 24/7. It's fun to hear Cher talk about what she's a fan of.

PBS showed a gr8 documentary on Roz Russell this week, I know CHER really admired her so I watched it and I can see why. A very normal but driven woman who gave selflessly to others and worked to find a cure of arthritis as well as living thru breast cancer and a double mastectomy. She was a brave woman who loved life ....like Mame said, "Life is a Banquet and most poor suckers are staving to death"