Cher did her first guest host stint on Turner Classic Movies in September of 2011. Here are links to my reviews of The Big Street, Follow the Fleet, Hobson's Choice, and Lady Burlesque.

Last Friday, Cher and Robert Osbourne launched her month-long program of guest hosting in April starting with a theme of Motherhood. I have to say all these movies were winners for me. I watched three of them Saturday and the last one this morning. 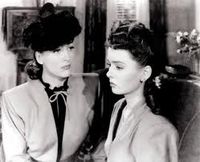 Mildred Pierce (1945) was the first movie in the lineup starring Joan Crawford in a hit after she had been dropped off the MGM roster. Cher liked that fact about this movie saying, "That's very me" and Robert (or Robby as Cher calls him) added that like Cher, Crawford was "a great survivor." Cher liked Jack Carson playing friend Wally and they talked about how Carson started out in comedies and ended up playing very mean (passive-aggressive, Cher said) characters. They both also loved Ann Blyth playing the evil daughter Veda and Eve Arden as Joan's sassy confidant and co-worker in the restaurant. Kids my age will remember Arden's as Principal McGee from Grease. Cher talked about how Arden's timing was so good and how hard it is to be a character actress as you have to "fight for your positioning." Cher loved how Crawford underplayed her performance and Osbourne said she won her Oscar for this "fair and square."

This is a black and white whodunit murder story that takes place in Los Angeles by the beach. Although I found it hard to identify or root for any in this bunch of manipulative characters (even Mildred manipulates Wally from beginning to end), I loved how this movie was shot, the special effects (the cigar smoke over Crawford's face in Wally's pier-side restaurant), the sound effects (the police station clock), the lighting (the fireplace in the beach house), the interrogation room architecture of the movie (I love those), the script was excellent, understated, interesting. Amusing moments included Crawford doing ladder work in a long skirt, Monte Beragon's hilarious swimsuit/sweater ensemble, and dated movie lovetalk like Crawford's saying, "You make me feel...I don't know...warm." My favorite line is from Veda refusing a hug from her mum: "I love you too but let's not be sticky about it."

Two of these movies had single mom situations and three of them dealt with women trying to be upwardly mobile in some sort of way. Mildred Pierce is a mother-daughter struggle where the daughter is the one trying to move up socially at any cost. Stella Dallas (1937) was another good mother-daughter story, except this time the relationship was a loving one and the mother was the social climber in Boston, although she stopped for some reason with the party set. But these two movies are still about bad mothers of one sort or another. But like Cher and Robby warned us, this one is a real tearjerker. I counted four sob scenes at least: the sad, sad birthday party scene; the sad, sad train scene; the sad sad scene with Helen Morrison; and the sad, sad wedding scene). Barbara Stanwyck plays Stella with great pathos and verve. For some reason these first two movies have giggly silly black maids.

Stella (her mom is played Marjorie Main whom we know as Ma Kettle) marries up in the class chair and she has a daughter but the marriage doesn't last. Stella hangs out with the wrong crowd and this affects her daughter socially. When Stella finds out how her gaudiness has ruined her daughter's chances at young love, Stella makes a grand sacrifice. This is the kind of movie many daughters and mothers would be able to relate to in terms of social awkwardness and affection. Totally recommend this one.

The supper club dress Stanwyck wears is awesome. In fact, this movie supplies Stanwyck with many interested and evolving looks.

At the beginning of the movie Cher and Robert Osborune talk about Stanwyck and her "dame" quality and Cher somehow forgets the name to the movie Lady Burlesque and Robert Osbourne reminds her, which seems odd considering that movie was one of the four in Cher's first set of TCM movies. Afterwards, Osbourne also asks Cher why she doesn't make more movies. Cher says she always thought she wouldn't make many movies. But she'd like to play something out of character, like a bag lady. (How about a villain?) 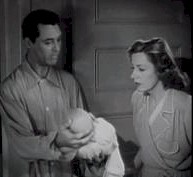 Penny Serenade(1941) stars Cary Grant and Irene Dunne and Edgar Buchanan as the crusty old sidekick. It's a story about newlyweds losing their baby in a sort of Japanese earthquake abortion, the dramas of adoption, and other tragedies of parenting. Cher was right, this movie has a great performance by Cary Grant (his monologue in front of the judge is notably good). The story is told through memories recollected from Julie Adams playing her old record albums after her particularly sweet marriage breaks up (how would an iPod change this story?). The opening scene at the record store (when records were 78s and sold in books) reminded me of my first job at Camelot Records at Chesterfield Mall in St. Louis. It was 1986 and there was not a single Cher album or cassette tape to be found in the entire store except that odd cassette compilation called Half Breed.

Anyway, I liked how many scenes of this movie were shot through doorways (train doors, bedroom doors, stairways), and how this was a weird alternate universe where somehow older children were harder to adopt than newborn babies. I appreciated seeing Dunne's normal lips on an actress. The movie also had funny new parent scenes and Grant and Dunne had good chemistry.The Christmas play scene was toots adorable.

Cher said this movie takes you to beautiful places and that the death of a baby is a hard thing to pull off and come back from. Cher and Osborne commented on how much older the actors looked and Cher said life was harder then and you couldn't look as good for as long. Osborne said people also acted and dressed their age. He said this without any seeming irony and Cher took the opportunity to laugh at herself self-deprecatingly. 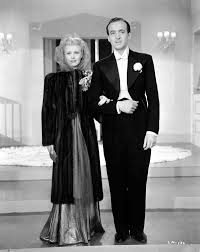 Bachelor Mother (1939) was my favorite movie of the night and the one I least expected anything from (judging by the title). My husband watched this one with me this morning while he worked on his thesis papers. We both laughed out loud throughout the funny storyline. Ginger Rogers and David Niven had lovely chemistry and I appreciated seeing Niven in a character that wasn't a British lothario. Cher says she can't turn this movie off if she comes across it. This must be like for me with Along Comes Polly--don't ask! Robert Osborne and Cher talked about how this wasn't a screwball comedy because as Cher says, it's too fast to be screwball.

I would definte it as more like snowball comedy, that is like a snowball, working off very interconnected and complicated misunderstandings.

Osbourne and Cher also talk about how great Ginger Rogers is without Fred Astaire. Cher says Rogers is her favorite female tap dancer because other women are too cloddy. This movie was directed by Garson Kanin and is about a single woman who happens upon a baby everyone assumes is hers. I was struck by how willing all the characters were to push a woman into single motherhood back then. Refreshingly, Rogers wants nothing to do with any upward mobility and her pride is stronger than any designs on marrying the rich department store owner's son, although the story does deal with the clash of class.

I love that it's a big fat baby at the center of everything. One of my favorite lines was, "Is it hard for a girl to get in the Navy?"

Cher and Robert Osborne talk about how this film got lost under all the great movies of 1939. And they're right, there's a Wikipedia page dedicated to the movies of 1939, which included two of the most famous movies ever, Gone with the Wind and The Wizard of Oz and many other classics like Dark Victory, Goodbye, Mr. Chips, Love Affair, Mr. Smith Goes to Washington, Ninotchka, Of Mice and Men and Stagecoach.

the records were 78rpm not 48 rpm, they were very heavy and shattered if you dropped them on the floor. My mother has a whole collection that she kept in a book or album like they would use for photos. She also had a really cool 78 record player that was embossed with crocodile skin and u played the records by sliding them in a slot in the front and pushing a button.

Yikes! Thanks for catching that typo...I fixed it. My parents had about five books of these too...not sure if they were from my grandparents...we had a big furniture type of record player that had speeds of 33, 45 and 78 but the only ones I listened to ever were the overly scratched Loony Tunes record.