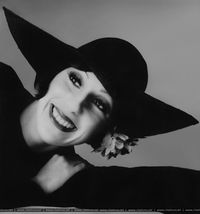 Although it may be months and months before we get Cher's new album of golden oldies (just kidding), there is plenty on tap for a spring o' Cher, starting a week from Friday.

Cher's mother's album (with Cher duet) should drop allegedly in early May right before Cher's special on her Mother may be aired on Lifetime on May 6.

Cher News talks more about Cher's tweets on promoting the special on Ellen and Jay Leno. I guess this is bad time for me to be thinking about cancelling my cable. Dammit.

In other news, Cher has flipped a house near where I used to live, Abbot Kinney in Venice, California. I moved in with Mr. Cher Scholar before he officially became Mr. Cher Scholar when he lived right off Abbot Kinney and San Juan. It was right as the neighborhood was starting to gentrify between 2006-2007. The neighborhood was still sketchy (our neighbor had chickens) but you could hear drum circles by the beach from the bedroom. The Edgar Winter Dog also lived there with us for a while. He loved cruising Abbot Kinney. People would come up to us and say, that dog is a party!

Read more about Cher's Venice, California, house for sale. Digital Spy speculates she may be planning a move to London because she has also re-listed her $45 million Malibu home.

Cher on TMC and Fashion Week 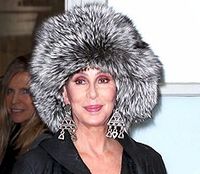 Cher with a husky on her head...and more news from Paris Fashion Week:

- Cher wears a piece of everything in Paris

- Fashion Police excerpt: "Cher was wearing head-to-toe crocodile and a huge fur hat, Fergie had a fur jacket and leather pants. Joan said more dead animals than you would find in the trunk of Gary Busey's car. With Cher wearing old leathery crocodile hide; it is too on-the-nose!"

- Cher stays true to form in flamboyant court jester outfit while in Paris with singer Fergie. Those 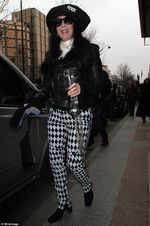 checkered pants would look better if Sonny was standing next to her wearing them.

Gossip columns rediscovered the Cher-Tom-Cruise partnership again this decade and it made headlines in various online spots, including The Huffington Post: "Tom Cruise And Cher Dated? Celebrity Couples That Will Make You Scratch Your Head" and yes, this does mean Cher dated half the cast of Top Gun.

A mini-photo reel of TomCher: 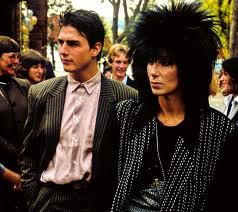 with Nancy Regan. That's Tom on the left cut off. 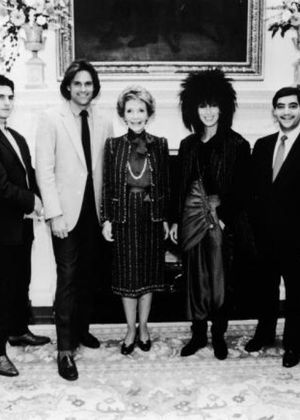 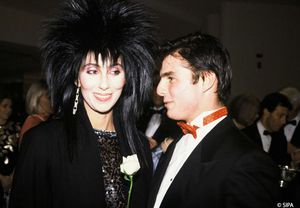 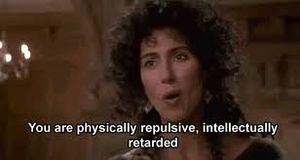 Cher, left, talking to her fans.

So it would seem Cher's album is delayed until fall and this is making the spot behind my eyes hurt not because I can't live without a new Cher album this month, but because we have to keep talking about it coming out all this much longer. They say in "new marketing" that you should create a buzz for your product on social media before it comes out. This is a good case study about how that can fall apart if the product doesn't come out on time. If Cher were just silently working on a new album, we wouldn't have a fan meltdown and we wouldn't have a Cher meltdown, one that may or may not have been either legitimate or dishy depending upon who describes it.

I don't know but I just need to lay down.

Contact Music took the shout-down more literally, "Cher confirmed it will now be moved back until after Summer in an angry reaction to fans...Cher expressed her disappointment in further Tweets, which have since been deleted." But Idolator said it was "all in good fun" (ah, yes) with tweets like "AM OLDER THAN FIRE,& TWICE AS HOT !" 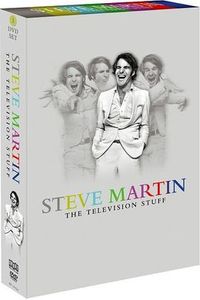 Anyway, let's talk about me. I am the first one to say I would like a new Cher album about now because Mr. Cher Scholar and I are going through a shitty time with our transition out of Santa Fe, New Mexico. But I will have to console myself with my 40-something other Cher albums and the other billion or so consumer products at my disposal, starting with the new a new DVD my friend brought me a few weekends ago, Steve Martin: The Television Stuff. I loved this DVD so much I wrote a 7-page essay about it for Ape Culture. Not only do I think early Steve Martin work was ironic and brilliant, I draw a direct connection between his meta-stand-up and the ironic Generation X meta-writers Dave Eggers, David Foster Wallace and Douglas Copeland.

I've talked occasionally about how Steve Martin was a writer on The Sonny & Cher Comedy Hour and friends with Teri Garr. He talks about this in his book Born Standing Up. In the DVD commentary of this set, he talks more about being a TV writer for The Smothers Brothers, Sonny & Cher and Cher, saying it was always his hope to become a regular comedic actor on one of those shows but it never happened. I once mourned that fact that Martin's humor never made it to Sonny & Cher skits, but now I think his own stand-up shows were exactly where he needed to break out and maybe The Sonny & Cher Comedy Hour was not a good fit for his kind of abstract pieces.

This week Cher scholar Dishy sent me a 45 of a song I had never heard before, Sonny singing "I'll Change." Later I found this clip of Sonny singing "My Way" which I sent to Mr. Cher Scholar to cheer him up today. It worked. 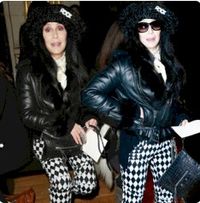 Let's all look at Cher in some silly pants and vow to get over these dramatic obstacles in our lives.

Cher at Gareth Pugh's show and her tweet about it

Another story about the Pugh show

Cher shopping in Paris with Fergie

More Cher shopping with Fergie: Mr. Paparazzi says: "We love a random celebrity friendship, and here’s one that is particularly so....She and Cher hit some of Paris’ most upmarket boutiques and were obviously out to splash some cash; they left one designer store wearing a completely different ensemble than the ones they entered it in."

See? The world isn't coming to an end.