What would a three-to-four year period be without a former Cher residence not going up for sale? I imagine a strange Chertopia forming, where every house in the western world is bought by Cher and redesigned to be resold looking Mediterranean, medieval, middle-eastern or in some way Cher like. A homogeneous Levittown-cum-Chertown. 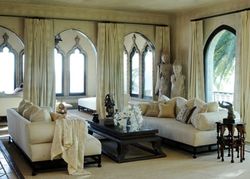 Just look at those Cher windows and tell me I'm wrong!

Cher is now selling her two-story remodeled condo in Sierra Towers in LA, ending her relationship with a residence along the lines of a similar pattern: she met it, bought it, changed it over (dating phase), photographed herself in it for Architectural Digest (wedding photos), and then decided they should both see other people, hopefully with a net gain for herself of 1 million dollars.

Allegedly her condo is the only two-story condo in the building, with neighbors such at Courtney Cox, Elton John and Joan Collins. She bought it in 2006 for $4.5 million and is listing it at $5.5 million.

If you're interested in moving in, the building boasts a 24/7 concierge service, a gym, a pool, a sundeck and her condo has panoramic views.

In other news, Contactnews is reporting that Cher's son Chaz has lost 43 pounds. From the picture, it appears to be true: http://www.contactmusic.com/news/chaz-bono-loses-43-pounds-on-health-kick_3513240

The photo caption claims Chaz is walking with his girl friend. She looks strikingly similar to Heidi Shink. If so, are they dating again or did the caption mean to say girl [space] friend?

The site Ultimate Classic Rock has named Cher one of the Hottest Rock Star Ex-Wives: http://ultimateclassicrock.com/cher-hottest-rockstar-ex-wives/

...although they admit she's "a legend in her own right." This is a nice nod coming from a classic rock site, I think. Did you know Allman has now racked up 6 wives? As Mother to Cher Scholar would say to Mr. Allman if she ever met him with this factoid, "maybe it's you."

The picture to the right is from the Richard Avedon photos that became the cover of her Dark Lady album in 1974, a year before she met Gregg Allman, before she was to become the ex-girlfriend of David Geffen. I look forward to the list that accumulates the hottest gay beards.

Mary the photograph with the those magnificent windows is of her Malibu home.The condo has straight lined windows. Boring.