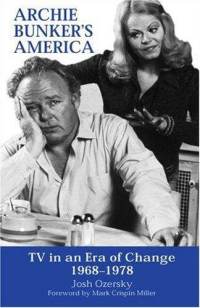 Over the years I have struggled with trying to get my head around The Sonny & Cher Comedy Hour in any critical way. I don't know if this is because I have a hard time revisiting many comedy shows I once loved as a young kid. The evolution of comedy sweeps you up and your sensibilities evolve with it. Looking back, the hilarity of certain scenes or gags don't come off as funny anymore. Comedic timing speeds up year after year and old bits seem to drag on too long. Comedy gets more irreverent, more piercing, more ridiculous. Boundaries are pushed and you look back to jokes that fail to have any humorous shock value.

But I also feel this segment of Cher's career, (and quite a big one at that), gets overlooked. Someone somewhere should be explicating the show. But pop culture academics aren't mulling it's relevancy.

But then a few months ago I came across the book Archie Bunker's America: TV in an Era of Change 1968-1978 by Josh Ozersky (2003). The book jacket promised some interesting interpretations of 70s TV shows:

Archie Bunker’s America discerns what was “in the air” as television networks tried to accommodate cultural and political swings in America from the Vietnam era through the late 1970s. Josh Ozersky’s spirited examination of the ways America changed television during a period of intense social upheaval, recuperation, and fragmentation uncovers a bold and beguiling facet of American cultural history."

The book is only available in hardcover and I'm not sure I would recommend it for simply reading about Sonny & Cher. For one reason, it's expensive--even used. I was also hoping the book would show evidence that the Sonny & Cher Comedy Hour played a role in easing mainstream American into multi-culturalism with their progressive booking of African American acts and introducing international themes to comedy and torch segments, although these segments do look a bit stereotypical in retrospect. Unfortunately, the section on Sonny & Cher in the book is brief and, after reading the entire thing, I'm not sure what their example proves.

The show was mildly licentious and filled with double entendres and showbiz hipness of the Vegas type. The entire production was suffused with a certain playful irony—“hey, we have our own show, let's have some fun with it. ” This was in stark contrast to their variety progenitors, like the Smothers Brothers, who for all their boyish irreverence were in dead earnest about producing a polished product. Sonny and Cher giggled at their own jokes, refused to take their skits seriously, refused to kowtow to “the great audience” the way more straitlaced entertainers did. They muffed their lines, ad-libbed often, and (the key to the show) really related to each other.

Thus did the informal atmosphere of the rock scene come to television by way of Las Vegas. As rock music began to be accepted by the Establishment as a fait accompli, television accommodated itself and rock did likewise. Professionalism went the way of live drama, and the proscenium separating audience from performer became only a matter of talent and/or good luck. Thus, the video archives of such buttoned-up interview programs as The Mike Douglas Show, The Dick Cavett Show, The David Susskind Show, and so on often feature mumbling, incoherent “celebrities” who looked high. Singers would forget the words to their songs. Comedians would “crack up” at their own jokes. This would have been scandalous or at least disastrous as late as the 1960s, but programs like The Sonny and Cher Hour [sic] eased the audience into the new culture, much as the Lear and MTM programs had eased them out of the old one.

The Sonny and Cher Comedy Hourwas truer than most to the culture however, and it continued to be so as the Nixon nightmare wore on...The forces of entropy apparent in the short life of the Sonny and Cher series were emblematic of larger forces informing American life. The women's movement, the fall of Nixon, and the overthrow of traditional attitudes regarding marriage, race, class, and deviance all combined with the largest and most acutely felt change of all—the collapse of the once-mighty American economy. The stylistic innovations of All in the Family and The Mary Tyler Moore Show were decisively engineered projects arising out of the network's perennial lust for ratings, “buzz, ” and advertising revenue. Now, shows for an unhappy culture began to come off the assembly line.

So the show essentially eased America into the idea of performers making bloopers and acting irreverent? Is that all? If so, didn't the crack-ups of Tim Conway and Harvey Korman do the same? Although the last paragraph above barely hints at this: I'd like to think the deadpan character created for Cher on the show was a powerful anecdote to the suppressed and patronized characters of Lucy Ricardo and Jeannie imprisoned in her bottle. At least this was the resulting interpretation for 3rd wave Gen X/Riot Grrl feminists like me.

I hope to dig up more pop culture theorizing about The Sonny & Cher Comedy Hour as I peruse the libraries of academia. But for now this book, with these slight few paragraphs, has given me something concrete to chew on and has altered my view of the show's possible importance to our cultural evolution.

i think the Sonny and Cher
Comedy Hour was like a lot of tv shows and cultural movements at that time:
"lighten up, open up and
stop taking yourself and everyone so seriously."
Still, the show was very
out-spoken about the war and politics and various
movements at the time:
Remember Cher as Rosa in the
re-current "Sonny's Pizza"
skit-- where she is reading
an issue of either a 'PlayBoy' or a 'PlayGirl'
magazine. I think she was holding it up-side down.

The Smothers Brothers
were very out-spoken against the war and politics. Actually, they were down-right anti-everything concerning America, sometimes.

Carol Burnett was a gem
and usually neutral. It was clear her and her co-stars did not take what they were doing seriously,
but, just having fun.(Just like Sonny and Cher.) the screw-ups were actually the funniest moments.
AND, remember, when Cher walked out on Carol's stage at the opening and professed to have meant to be going to the bathroom; because, there was supposed to have
been a connecting bathroom to both studios???

Archie Bunker was the perfect in-your-face "hey,
america, you better stop,look and listen to what's going on AND decide
who you are and where you belong in all of it."

AND, dare we even start with
'LAUGH-IN'?

i don't if what i just wrote makes any sense and is even true of those time.

jimmydean
ps-- i have a HUGE collection of I Dream of Jeannie Bottles.... :)