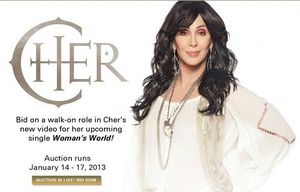 Cher and her peeps have devised a contest to fly in fans to meet her and attend the taping of her "Woman's World" video. Originally the contest was to be a Twitter scroll random pick sort of thing.

But you know...lawyers get involved and the thing gets mired in legalese.

It's a pretty sweet contest and there are a few ways to win: bid your way to the top (you richie ditchies) or enter the random pick. According to the official rulz, if you bid:

"the funds raised from this auction will go directly to the maintenance of the Shikimana School in Kenya which Cher built two years ago under the auspices of The Cher Charitable Foundation. The school educates young children in need and provides medical help and nutritional meals for the students. The Shikimana School also acts as a community center."﻿

﻿If you are part of the underclass, like me, you can still throw your hat in the ring for a free trip to Los Angeles and time to hob knob on the video set with Cher. Pretty nice, huh?

Cher World breaks it all down nicely.

Or you can go directly to the Facebook page to enter: https://apps.facebook.com/womansworldwin/contests/310497. God forbid, if you don't have a Facebook account by now you must join.

My husband refuses to do this, even for a chance of meeting Cher.

Cher Zombies, you have until Thursday, Dec 17 at 3:00pm PST to enter. God speed.