Many thanks to Dany for sending the link to Cher's appearance on Night of 100 Stars in 1982. Check the video near the 6:20 mark. Cher appears at the back of the stage. 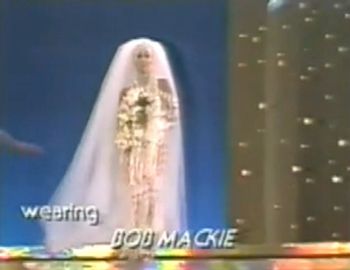 There are a few things I want to say about this clip:

Yes, it was good to be 12 years old in 1982, although it was a quiet time in between Cher comebacks. You thought nobody cared about Cher in that gap of fame time, but apparently they did.

I watched the whole clip. I think Ann Jillian got the worst outfit - looks like a prison uniform. I miss TV like this and Battle of the Network Stars!