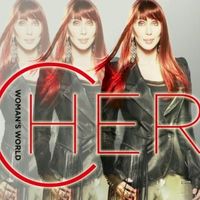 I spent Thanksgiving weekend in New York City, seeing The Book of Mormon on Broadway (totally awesome!) and viewing Katharine Hepburn's costumes in a show at the New York Public Library for Performing Arts (also awesome), visiting my friends (more on meeting Cher-scholar Dishy once I download my photos this weekend), Sarah Lawrence College, the city itself and enjoying some good good food (bagels, pizza, knish, Chinese food for Thanksgiving in Chinatown).

I'm sitting in the lobby of MOMA on Friday, waiting for Mr. Cher Scholar to find a bathroom, when I see this Billboard.com headline on my iPhone: Cher's 'Woman's World': New Single Gets Early Release. It seems the constant leaks of the song somewhat encouraged a hasty release. But dammit! This was not a good time to mosey on over to YouTube to hear the official song. That would have to wait until Friday night back at our hotel, the brownstone Chelsea Lodge.

This was my first Cher release on an iPhone. That was exciting but sadly, neither me nor Mr. Cher Scholar were blown away. In fact, he called it "boring." Ack! I was more troubled by the inane lyrics. Dishy and I commiserated over this the next day. He gave me a printout of the lyrics. At my most generous I want to say the song is a double-play of words (the word "woman" being a nod to both feminists and gay men). Women don't need no stinkin' men. We're strong, love hurts, etc. etc. A pretty empty girl/gay mantra at the end of the day. After all the smart, poetic imagery found in material on Believe and Living Proof and the unreleased song "Human" from Stuck on You, this fails to get under my skin the way Janelle Monae has been doing. It's also too close to covered ground.

That said, I didn't like "The Music's No Good Without You." I didn't much like "Just Like Jesse James" or "Half Breed." Hell, I didn't love "Believe." And clearly the masses disagree with me. My favorite songs to date are decidedly non-hits. So Cher has nothing to worry about. This may be another cash cow.

So far, the song has been getting positive feedback out there:

But hey… consistency isn’t a bad thing. It’s pretty amazing, actually. With the possible exceptions of Paul McCartney and Barbra Streisand, Cher is the only pop star of the 1960s who is still releasing new music that people care about. And of those three, she’s the only one who can reasonably expect her new songs to reach across multiple generations. If we take her excellence as a given, then that’s just proof that she rules.

The song was set to appear on iTunes this past Monday or Tuesday, but as of today, Saturday, it has yet to appear. You can, however, search "Woman's World Cher" on iTunes and find a free podcast copy of the "Let's Stop Misogyny Bootleg Club Mix."