Get Well Cards for Cher's Mum and Kitty 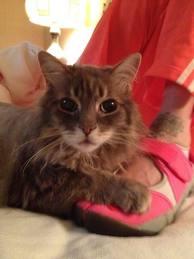 There was news last week that both Cher's mom and cat were under the weather. For Cher's mother, Cher News reported that Georgia was recovering from a bout with pneumonia. Pneumonia can be very scary. Even scarier for Cher, apparently Georgia wants to start tweeting. Recently Cher tweeted that her mom was "Much better. I'm going to her house, and let her tweet, but I will be on iPad. I can't trust her, in one minute, she'll be showing naked baby pictures."

"Mr. Big is sick in hosp (hospital). My friend Kat is with him, she's top heart Dr (doctor). I was crying... The weird thing is I never think about him sick! He was almost dead when we found him in Detroit, but after that he has never been sick."

Cher posted a number of pictures of Mr. Big and later admitted the cat was starting to show signs of improvement: "Mr Big in his little oxygen tent, getting his Iv of meds (medication) wrapped in blanket, but he's still eating! Nurses love him... Kat, his heart Dr. says he will be well enough 2 (to) have echocardiogram (a heart scan) tomorrow. Says he's feeling better after meds (sic) & oxygen! Better is good!..

"I'm great in an emergency, but I cry when it's over & everything is fine!"

I hope Georgia and Mr. Big get well soon. Then if Cher won't let Georgia put naked baby-Cher pictures on Twitter, we can get Mr. Big up and tweeting instead. Imagine the tweets that little guy could send us.