Last Sunday, Family Guy aired a Christmas episode called "Jesus, Mary and Joseph" about the story of Joseph and Mary (and Stewey as Jesus). Mr. Cher Scholar and I watched it and our favorite lines are:

Peter as Joseph to Lois as Mary:

Mary, tell me again how it is that God got you pregnant? Cos when you tell the story it sorta makes sense. But then when I tell the guys at work, they poke all kinds of holes in it.

There's a running Cher joke through the episode starting with when Joseph first asks Mary out on a date:

Peter as Joseph: Hey listen I just got tickets to see Cher in Bethlehem. Wanna go?

Lois as Mary: I guess. How close are the seats?

Later when Joseph and Mary are trying to find a room at the inn, the character Mort plays the innkeeper and refuses them.

Mort: Sorry. We're all booked up. Cher is in town. You won't find a room in the city.

Joseph and Mary plead to no avail. Mary's water breaks and Mort gives them space in the inn's manger.

From a distance in the town you hear sounds of a crowd and Cher shouting.

Cher: Bethlehem! I have one question for you.

Cher sings: Do you believe in life after love?

Peter as Joseph: Jah! See? I told you she'd open with that.

The joke being that Cher has been around so long....

Anyway, I wouldn't be a Cher scholar if I didn't point out that Cher never opens with that song. But that's the cross I bear.

Family Guy has done a smattering of Cher jokes over the years. Last year they did this Cher impersonator in a wheelchair joke.

Years before the show hit its stride, they did a scene where Meg pretends she's Cher singing to the troops, but with disastrous results.

In another episode a few years ago Peter writes "Retire Cher" from an airplane similar to the way the Wicked Witch of the West wrote "Surrender Dorothy." 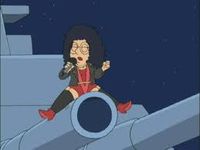