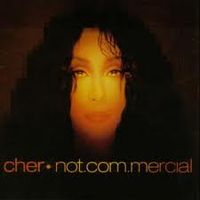 In 2001, Cher independently released a record of music she either wrote herself or co-wrote while at a songwriter's retreat outside of Bordeaux, France, with the likes of Patty Smyth. She recorded the resulting songs with David Letterman's band and released the album on what was then Artists Direct under her Isis brand.

The name "not.com.mercial" was a play on the phenomenon of the Internet at that time and all things being ".com" which allowed Cher to release her music directly to her fans and the fact that Warner Bros., her label at the time, refused to release it with the critique that it was "not commercial enough." So I'm prejudiced apparently but I think Cher could spit on a street corner and that would be commercial enough.

The tracks were recorded between Love Hurts in 1991 and It's a Man's World in 1996 and the music serves as a bridge, sound wise, between the bombastic late 80s material and the mellow late 90s material. Cher tackles beefy themes such as her feelings about the Catholic Church of her childhood (in the controversial "Sisters of Mercy"), American military veterans (in the tight "Fit to Fly"), a kind of restlessness which might explain her need to buy new houses every two years ("Runnin"), the problem of homelessness ("Our Lady of San Francisco" which contains the unfortunate Bob Dole line that everyone gave her shit about), showbiz advise to Chaz's old girlfriend ("Disaster Cake"), general heartache ("Still") a song that would have broken up the monotony on any shlock-rock 80s album ("With or Without You"), and finally, a cynical song about Kurt Cobain ("The Fall"). It's good Cher-speak for unbelievers.

You can buy a t-shirt too.