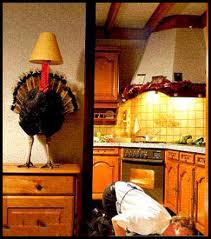 Inventing David Geffen to Air on PBS Next Week 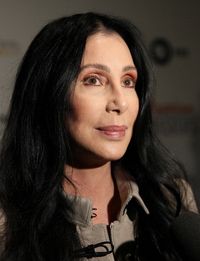 On the red carpet she spoke of their relationship saying she was crazy about him and they were in love. When asked if Geffen was gay at the time, Cher responded that at that time in his life, she was the right person for him.

It was a long process. During a period of four years, I was doing interviews [off and on] whenever I could. It turned out it was a really good thing that I could do that. Because the people I really wanted took two years to schedule. It took a long time to get Neil Young, for example, who tours a lot. I think Cher is a huge addition to the film, another person who's very difficult to schedule.

Reviews of the documentary:

Another PBS must-watch is tonight and tomorrow's Ken Burns documentary on the Dust Bowl. It's as relevant today with its arguments over science and man-made disasters. 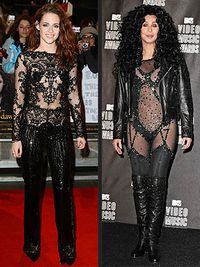 People Magazine is running a bodysuit poll and who doesn't care about bodysuits so go make your voice heard:

Stewart wore her revealing ensemble — a shimmering, backless number — to the London premiere of The Twilight Saga: Breaking Dawn — Part 2 on Wednesday and earned mixed reviews from readers, some of whom found it sexy and some who thought it was salacious.

Cher has worn black bodysuits a zillion times throughout her career, most recently to the 2010 MTV Video Music Awards (left) — and most famously in her “If I Could Turn Back Time” video. And we’ve gotta say: she’s worn them well.

So who looks best? The newbie or the old (yet ageless) pro?  Vote in our poll.

You know what to do.

This is why Donald Trump can not be president, like ever. Why does he even have the time or even care to catfight with celebrities? He should be writing books about foreign policy and economics, not twitter-talking birth certificates, college transcripts, rugs and plastic surgery. It's egomaniacal and distinctly unpresidential.

Besides, haven't we already been here before?

But alas, here we go again. To see the hurling tweets, visit: http://entertainment.nbcnews.com/_news/2012/11/14/15167389-cher-mocks-donald-trumps-hair-he-disses-her-plastic-surgery

Cher and Another US Election 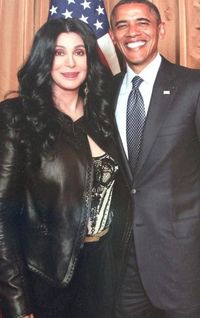 The US has survived another election and Cher has posted a picture of herself with President Obama taken prior. He looks like a kid in a candy store!

And later, she tweeted:

"We've come a LONG WAY TOGETHER !" "I know I was a pain in the ass with all my political info! I remember some of U saying we don't care about Politics Cher ! This is boring Cher, But you were open & u told me what was happening with the GOP ! We did this together ! Congratulations!"

Cher was far from boring in her video rally with Kathy Griffin. In fact, funny outtakes have surfaced that are even funnier.

More of her election nite tweets can be found here.

If you are intent on voting a Romney ticket, you probably won't enjoy these first three videos. Here we are the weekend before somewhat of an historic election in the United States. And although Cher has not been guesting on talk shows such as she did in elections past, she's been busy tweeting. And now she and Kathy Griffith have posted an election PSA spot on the YouTubes. Message aside (you had me at hellooo), I think Kathy and Cher could take this act on the road, or at least to a new TV variety series.

My cousin also sent me this good election PSA (billed as a paradoy of Les Miserables but it's not very ha-ha-funny as you find most parodies) but it's pretty inspiring nonetheless.

One of my favorite election PSAs this year is from Leslie Gore done to her song "You Don't Own Me."

It's full of lady-power and confidence! Riot Grrls come to roost.

Unrelated to the election (is that possible?), my dad is now into an artist named LP and he sent me her video link from a recent performance on David Letterman.

She's awesome! I plan to dig more into this!