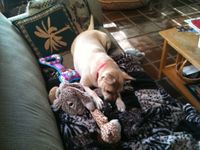 Introducing Bianca Jean. We just picked her up at the animal shelter last weekend. Which is why I've been offline for so many days. She's a complete sweet-pea but the addition threw our lives out of kilter in a big way. I'm just now getting back into any kind of routine.

I'm working on a book as well and in the final throes of challenges. In a weekend of depression over it all I impulsively bought two Cher items. 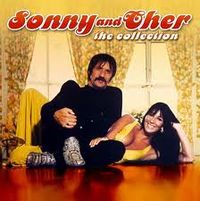 One is the CD Sonny & Cher the collection, the newest Cher compilation from Rhino. The CD copy seems to have been written by a Brit who uses words like CV for resume. Maybe it was my foul mood but I was really annoyed with this thing. First of all, the liner notes written by Michael Heatley misspell her last names as Sarkasian Lapier. He also perpetuates the rickety stereotypes of Sonny as a "swarthy Italian with a nose for talent" and Cher as "half Cherokee Indian." Then he repeats the legally false claim that they were married in Mexico in 1964. After these PR retreads, I completely ignored the chart number claims not wanting to fill my head with erroneous and possibly incorrect facts.

I did like his describing of their sound as "sunshine pop" and labeling Cher as a "bestockinged siren." He also quotes Cher as saying her best quality is that "I just don't stop." There's something simple and profound in that idea.

What is to say about the compilation itself. It's simply a mish-mash shuffle of their duet Atco albums. Nothing special a'tall. And the text on the back cover is worthy of a snicker:

There is much to enjoy in this comprehensive collection of 40 sunshine pop classics from a couple who, as they looked down from their stools on Top of the Pops, had the world firmly at their feet.

Looked down from their stools. Tee hee. Indeed, something about this does smell of shit.

Then I went and bought the 2010 book Conquer the Cosmos--Use Astrology to Attract a Man, Money, and Happiness You Deserve by Bridgett Walther just because Cher wrote the foreword to it. Barely. The foreward is no more than three short paragraphs and a sentence and the idea seems ridiculous that Cher actually wrote any of it.

In the text Cher, who says she is a Taurus with Cancer rising by the way, insists she was always surrounded by astrology grouping up because she was "surrounded by my parents' friends" and they were always discussing astrology. Now, I'm far from a Cher intimate, but I don't think I've ever heard Cher say "my parents." She would talk about them individually but not likely as a unit as they were never together in her memory. Also, she never spent any time with her father's friends, if she knew them at all. She has said she only got to know her father after she became famous, when it was practically impossible to really get close to him.

I do however believe that she would call Bridgett "at the crack of dawn" to get the astrological lowdown on one of her life crises.

I read the introduction and all about the signs pertaining to me. The book is written for women, and I get the idea her ideal audience is Los Angeles women for the unusual amount of of plastic surgery mentions in the Leo section. I did find out that due to being born in the second week of Leo, I'm probably more of a Sagittarius. After reading up on a Sagittarius for the first time in my life, this made  sense to me. I've never felt like a legitimate Leo and always chalked this up to my parents probably lying about my birth date and actually finding me in a basket floating down the river.

Sonny and Cher did not perform sunshine pop, a very specific type of Southern California-influenced musical genre of the late 1960s. (Popular examples include The Mamas and Papas, The Sunshine Company, and Spanky and Our Gang.) I hate this compilation without even seeing it.

The Sonny & Cher "Collection" CD is being promoted by the main record shop (HMV) here in Britain for the summer sales - the only Cher album in their special offers. I suppose it must be a British release?