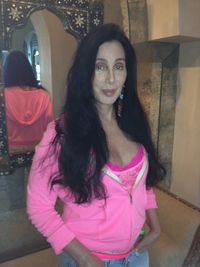 Went to Kansas to visit in-laws last week and while I was gone tweets and news bulletins went a-flyin about Cher's new album. Cher also tweeted some sweet new pics. An overview:

-- There are two songs written by Pink, who says of contributing songs that it was "such an honor...I'm such a fan." One of the titles is supposedly "I Walk Alone." I'm such a fan of Pink being a fan of Cher!

-- There may also be a duet with Christina Aguilera. This is far from confirmed and would be ironic considering they made a musical together but have never sang together. I know. Makes no sense to me either.

-- Producer Timberland is also involved in one song at least. 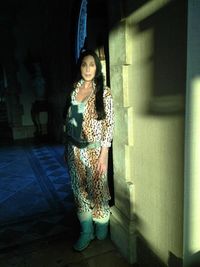 -- Cher is very happy with the results so far, often tweeting her excitement on various songs. "It's funny, I'm always drawn to same kind of song - overcoming pain, being strong enough and believing in love!"..."I worked hard last night! I go in and sing for ninety minutes to two hours straight! I don't like sitting down until the song is finished! Usually I can ace one song in one session! 'You Haven't Seen The Last Of Me' took two hours; 'If I Could Turn Back Time' took ninety minutes! I'm fast!" ..."Many artists take a lot of time but more time wouldn't make my vocals better. I don't mean to sound pompous, it's the only way I know! 'Believe' was the worst time in studio - that's why we used pitch machine! It just wasn't working".

-- A single is now slated for October not September and an album around Christmas. This will be here before you know it!

Cher also posted current photos, including the pink one at the top and the leopard-print jammies she said she wore to the studio. 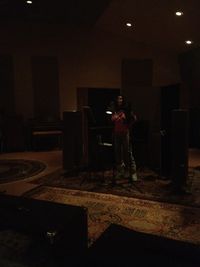 As Cher Scholar, I am absolutely salivating over modern pictures of Cher recording in the studio! Is this even a studio? To be a fly on that wall, a bug on that crazy carpet. Below you can see the producers at the board.

Cher News also gives an overview of reports that Cher is working with RedOne (producer of "The Greatest Thing"), J-Roc, Kuk Harrell, and Jason Derülo. And then there's Diane Warren. More obvious rhymes and vague sentiments to be expected there. It would be sweet to have this album be peppered with so many young divas and producers. 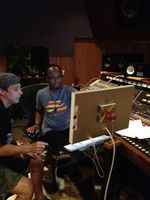 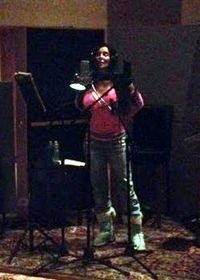 It's the first time we've been treated as fans to such extensive documentation in photos of Cher in the studio. Kinda remarkable, no? love the photos and the decor around her as she wheres neon and ugs ( whatever you call those soft boots). Also think she looks great in that soft light.
Hope she's making magic sans the vocoder.
fingers crossed, t.

I als want to thank you for your excellent reportage and writing this summer. I look forward to it in hopes fo something new each day. You have a great gift with language. And a talent for analyzing the Cher spell we fans endure. Cheers t.

Hello. I'm Daniel from 'Cher News' and I want to thank you for often including news and information from my blog in your posts on this wonderful blog that you have - I've been an admirer of it for years!