Oh My Divas!
Bangs are Back Baby! 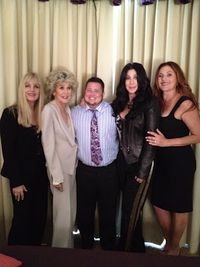 a Los Angeles LGBT fundraiser for President Obama. Before the event Cher and company took some photos at home to post on Twitter.

Seriously, is that camera on a fireplace mantle? Doesn't Cher have a live-in photographer already?

You can see many more photos before and during the event posted on both Cher News and Cher World, including some with Jewelry Designer Loree Rodkin:

She practically devoted the entire show to Cher moments, playing her songs and kidding herself about the napkin outfit she seems to be wearing. Stephanie, Producer Chris and Voice Deity Jim also discussed the chance of Cher appearing on the radio show and decided it was slim to none because as Chris said, everyone knows Cher sleeps until noon. He said he could tell by her tweet schedule. When he gets up at 4am to get ready for their morning talk show, Cher is still up winding down on her tweets.

But for real, it's a perfect show for Cher to discuss her politics. Or am I just rationalizing in an attempt to bring two of my favorite things into one product?

I suppose I am.