Chad Michaels Excels on Drag Race
Speaking of Speaking Out

This Is Cher, A Cher Zine #3 has been reviewed! 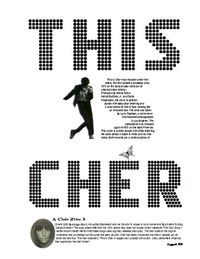 Back in 2005, Zine World reviewer Anu Schnuck called Golden Greats: A Cher Zine 2 “a must for Cher fans.” Australian zine-reviewer Dann Lennard of Betty Paginated and Zine World recently posted his latest reviews including one of Cher Zine 3 from the point of view of a non-fan.

"As a massive non-Cher fan, I still found a disturbing amount of interesting material to absorb. Like Cher’s tenure with Casablanca Records in the late 70s – including her flirtation with disco, heavy rock (with her band Black Rose), pioneering music videos and…Gene Simmons. Or the making of her obscure 60s hippie flick Chastity (which I somehow managed to see on an Aussie regional TV station when I was a kid). The lengthy piece on Cher’s infomercial career jumps the shark (nine pages…seriously?). But this zine did the near-impossible for me, it made me care about Cher. Hell, I may even pick up her Black Rose CD off eBay now."

I have to concede that the infomercial article is very long, but as the only Cher-infomercial defender out there, I had to make an airtight case for my argument. Besides, the Casablanca article is 17 pages long!

I am disappointed no one has made special mention of the racy Sonny centerfold.

Posted at 11:53 AM in Scholarship In Action, What This Really Says About Me | Permalink | Comments (0)