Photo Tour of Gregg & Cher
This Is Cher, A Cher Zine #3 has been reviewed!

Chad Michaels (far right) made it to the top three of Ru Paul's Drag Race at the end of the season along with with Phi Phi O'Hara and Sharon Needles (middle, who won). It would seem there was no official second or third place on Drag Race this year.

I watched the entire season for the most part in three days last weekend. By far, Chad was the prettiest in most challenges, and in some challenges the only one to really get it right (see the inaugural ball challenge below).

He was thrown some shade for his age (being over 40), his plastic surgeries and (from judge Michelle Visage) for being too perfect and not messy enough. Ru Paul also challenged Chad at the end of the season to tap into his emotions more.

or the "Snatch Game" episode, which was a spoof on The Match Game show. See the animated gifs of the episode from "Of Coursets a Drag."

Chad, Sharon Needles and Latrice Royale were my favorites. And if Chad was not destined to win, I'm glad it was Sharon.

Sharon Needles pushed the envelope, was witty and cute as a button in his scariness. He raised the competition to a level of performance art.

At the end Ru told Ch

ad he raised the level of the competition this season and was a real class act. Which was true: he played the adult in the room, the negotiator, the conversation starter, the mama of this den of bees, always trying always to stay above the DRAMA.

But he was in a real bind competition-wise because it was only in the moments of messy fighting that Chad was able to show that emotional side: fighting with Sharon's icky hetero-drag-model, confiding in Sharon about Phi Phi's treachery (on an Untucked episode), and crying when discussing gay marriage and when apologizing for being harsh on Phi Phi's innocence/immaturity.

If he had showed too many of these moments, maybe he wouldn't have looked so classy. 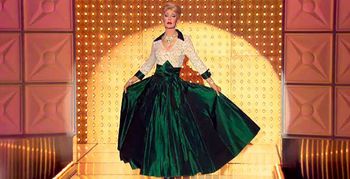 I'm a huge fan of Drag U but this is my first full season watching Drag Race. This is because watching bitch-fights sometimes gives me high anxiety. But this season was exciting (Willem getting kicked off suddenly, the spectacle of the big finale) and emotional (drag queens crying) and also sometimes uncomfortable (the political challenge, the episode trying to drag out butch dads).

Watch for Latrice on Drag U next month. Her blue boat/blue hair outfit killed me!