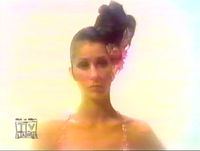 Cher sings the Bread song "If"--a most unfortunate choice to play in your wedding if your wedding happened in the 1970s and 80s.

This is the most hilarious hair style on a Cher TV solo spot...even she looks pissed off about it.

The lyrics of this song really make me nuts, even when I was a preteen and particularly disposed to the sappy effects the song conveys:

If a picture paints a thousand words than why cant I paint you
(who says you can’t?)
The words will never show the you I’ve come to know
(sounds like a You problem)
If a face could launch a thousand ships than why can’t I launch you (No!)...than where am I to go?
There’s no one home but you; you're all that’s left me to.
(You’re all what’s left me to what? You shouldn’t end on a preposition for all this vagueness: that's all you've left me to)
And when my love for life is running dry, you’ll come and pour yourself on me
(Like in a nagging way?)
If a man could be two places at one time, I’d be with you
Tomorrow and today, beside you all the way (tell it to the judge, rock star)
If the world should stop revolving spinning slowly down to die (WTF!)
I’d spend it all with you and when the end was through
Then one by one the stars would all go out (this is NOT romantic)
Then you and I would simply fly away. (you think so if-boy?)

The song is mercifully only 2 and a half minutes long.

In this clip of "I Got it Bad and That Aint Good" you see a promo cover of the Bittersweet White Light album (can I say--this was a particularly poetic title for a Sonny-produced Cher album, or any Cher album for that matter). The clip also contains the I-got-it-bad wig. 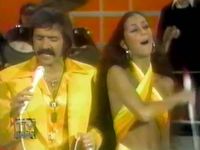 This is a clip I remember seeing in the 1970s, Sonny & Cher singing "Delta Dawn." For days I circled the house singing the chorus over and over again. My lucky mom. Sonny is really rockin it here....but it sounds like they turned his mic off before the end. And that....is quite a shocking bit of yellow.

Good Hollywood Reporter story that appeared back in February about David Geffen: http://www.hollywoodreporter.com/news/grammys-cher-david-geffen-289539 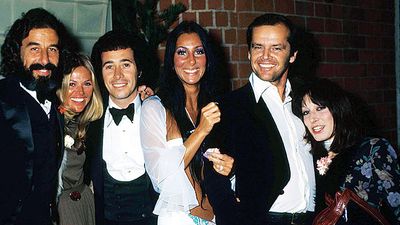 Bread's David Gates wrote that song IF about his mother dying of cancer!
Quel horror!

awwww. Now I feel like a jerk! Well, all the more reason not to play this song at your wedding. But seriously, now that I know it's about a parent...they ARE paticularly hard to render on paper. This is true. And you're allowed to be sappy about your mum. My apologies to Mr. Gates.