There’s been a surge of cool stuff showing up on the YouTubes. I have a whole list of things to discuss but we can start with these three items:

Here is one of my two favorite Sonny & Cher show duets, "Stagger Lee/Rip it Up" from the early 70s Sonny & Cher Comedy Hour. I love that song "Stagger Lee" and they really do a swell Sonny & Cher version of it. The bright lights, the big stage. It's all good. 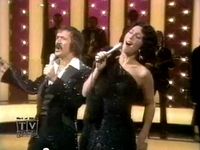 Sonny & Cher singing "Two of Us/We Can Work it Out" from their 1976-77 The Sonny & Cher Show. I loved this one so much after I saw it again on VH1 or Nick at Nite back in the 1990s, I wrote a poem about it. They look so glamorous and happy.

I love the part where Cher’s earring dives for the deck and Sonny gives her a teasing smile.

So the following bits are a bit timely of late, seeing as the comedian Gallagher just got out of the hospital. Remember his silly watermelon bashing bit? Well, Cher did that act five years earlier with the Jack-o-matic, the Wonderbat, the Brick-o-matic, the Mug-o-matic. On the Cher Show in 1975, Cher did a recurringly unfunny skit called Donna Jean Brodine showcasing tools for the new housewife which were basically many forms of sledgehammers 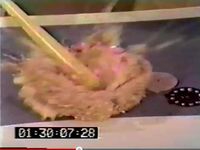 for any task. Since this event predates Gallagher’s Sledge-o-matic debut on television by at least five years, why doesn’t anybody mention this? I guess it’s not the kind of comedic bit you want to take credit for. They’re both southern characters doing fake infomercials and even both borrow the “o-matic” trope. 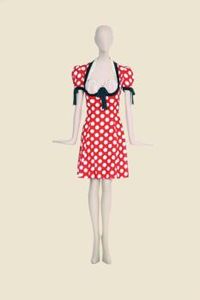 Her outfit for the skit recently sold at Julien's for a whopping $4,500.