Drew Barrymore is on Team Cher

Cher scholar JeffRey posted the following on the Cher Yahoo list from the 23 March issue of Entertainment Weekly where it was announced that Drew Barrymore would be co-hosting Turner Classic Movies with Robert Osborne soon.

She was asked who are her favorite screen sirens of all time. She chose Julie Christie, Faye Dunaway, Jane Fonda, Annette Bening and Cher. This is what she has to say about Cher:

"She's strong and comedic and incredibly brave, but shows vulnerability. I think she's the epitome of rock & roll," says Barrymore, citing Silkwood, Moonstruck, Mask, and The Witches of Eastwick as some of her favorite Cher performances.

Hell to the yeah! 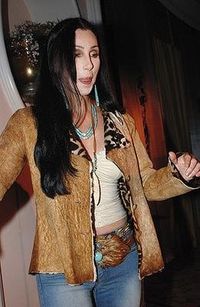