Christmas with Billy the Kid 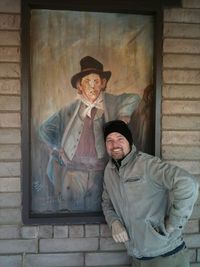 Sigh. Life continues to get in the way of Cher schoalring. For Christmas, Mr. Cher Scholar and I headed down to southern New Mexico to visit the Billy the Kid locales of Fort Sunmer (where he was kilt) and Lincoln (where he made his brazen escape). Then we headed to Roswell for the night. Sadly, my Uncle Ben (really my Dad's cousin but practically an Uncle to me) passed away on Christmas Day and the funeral was set for the following Wednesday. So we decided to head home, on the way seeing our remaining sights of Carlsbad Caverns and White Sands. Mr. Cher Scholar poses to the left with Billy the Kid; Franz poses below on White Sands snowy beach.

In the meantime, I've been saving up a few links from friends.

Cher groups at Yahoo posted this link to USA Today's own version of the Rock 'n' Roll Hall of Fame --the fashion edition and Cher sits here with some reputable company: http://mediagallery.usatoday.com/Women%27s+role+in+rock/G2245?csp=lfmpg

Cher scholar Tyler sent around this interesting link -- a story about one-time Cher Show and Sonny & Cher Show writer Iris Rainer Dart who wrote Beaches with Cher in mind. Oh, how sweet that would have been.

In fact, she was apparently the only female writer on those TV shows, saying,

"she had to prove her mettle, mostly by "not crying," even when criticism was rugged. Brutal honesty was the name of the game and no one was too concerned with hurt feelings. Still, as the sole woman on the show, she had a close relationship with Cher, who ultimately became the model for the lead character in "Beaches." Initially she had hoped Cher would play the part in the film version, but in the end it went to Bette Midler."

And finally, Cher scholar Dishy was kind enough to recall my frustration that not enough non-"Believe" Cher mashups existed in the Universe and sent me this new mashup, Lady Gaga's "Bad Romance" mashed with "Song for the Lonely."

I so love mashups. I really do.

Posted at 05:25 PM in Cher Outfit Watch, Film, Music, What This Really Says About Me | Permalink | Comments (0)