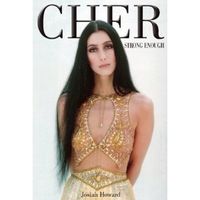 The photo cover for the upcoming Cher biography Strong Enough by Josiah Howard is up on Amazon, due for release May 15.

In the meantime, I finished You Haven't Seen the Last of Me, the big coffee table biography by Daryl Easlea and Eddi Fiegel. I loved this book, the writing, the layout and learned a lot. Cher Scholar being a Cher scholar (it's compulsive), I am left with these few questions.

1. Who's idea was it for Bonnie Jo Mason and Caesar and Cleo to change their names to Sonny & Cher? Phil Spector's? Their managers? Their own?

2.Do you spell her surname Sarkisan (as in the book) or Sarkisian? And was her second surname La Pierre or La Piere (in the book it's listed both ways on different pages).

There are some bloopers in the book...a few are:

1. Sonny's first wife has always been alleged to be Donna Rankin and not Donna Allen.

2. "Holdin Out For Love" wasn't written by Billy Falcon. The awful "Boys and Girls" was.

1. Describing her character on The Sonny & Cher Comedy Hour as a "glam bitch."

2. "The swirling fairground feel of "Gypsies, Tramps and Thieves" sounds as stunning today, over 40 years later, as it did in 1971."

it is a good book.

Rona Barrett once said on
GMA('75), that a coffee-table size book of cher was coming out... but, it never surfaced...
True, the book has some errors... my bitch is:

the choice of pictures was
slim pickins'... and why didn't they do some full
page photos?( the dress from
TIME Mag cover; the Half-Breed outfit; the "blue-jeans" pic from Stars; some
of the Cher 'solo' costumes from the tv shows... SOME
"Head-shots";.. etc.(mary, i told you we should do a PHOTO book of S&C.)

Cher met the QUEEN??? and,
they didn't give coverage???

ANSwers:
1. i read that S&C lost their luggage at the oakland
airport and had to go on in
their usual attire for a concert and that was when
they realized they should
just use their own names....

Any mention in the book of Cher's regular appearances on Mr. Blackwell's annual fashion lists or her reaction to it?
He used to do them every January; I don't think anyone else has picked it up since his death.

No mention of the Blackwell lists. Those lists were so popular in the 70s and 80s. I wonder if the proliferation of ubiquitous tabloid magazine judging panels has replaced the heft of Blackwell's once-solitary outfit-judging powers.