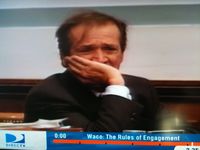 So you know there's this conspiracy theory about Sonny's death involving his activities as a US Congressman, specifically his involvement in the Waco hearings. People are still talking about it 13 years after his death, as recently as February 2011.

I myself was just plugging in "Sonny Bono" to my new Direct TV's Smart Search in an effort to finally snag his Charlie's Angeles and Murder She Wrote episodes. His appearance on the documentary Waco: Rules of Engagement showed up on my search list so I taped it, figuring I could see him in the movie asking pithy questions during the totally f-'d-up Waco congressional hearings.

I've been thinking about Sonny lately because a) I just did a Cher zine article on 'Sonny without Cher,' reviewing his movies from the 70s and 80s to which I tacked on highlights from his congressional voting record; and b) I'm reading the new Cher picture-bio You Haven't Seen the Last of Me (and highly enjoying it) and I'm up through the late 70s and with all it's Sonny & Cher drama.

In order to locate Sonny's scene of congressional questionings (which you can easily find on YouTube), I had to watch this whole thing on Waco, a story I've spent over a decade avoiding because I didn't want to have to endure the powder-keg tragedy sparked between a group of extreme Christians (they were decoding the Seventh Seal) and two corrupt government agencies, the ATF and the FBI.

And it was all the horror I dreamt it would be.

I watched it though, getting angrier and angrier, waiting for Sonny's entrance. It was a long slog until he appeared, 2 hours and 35 minutes in (that's the time on my Documentary Channel version anyway, including commercials). After hours of a camera on soul-less government congressional faces, not a 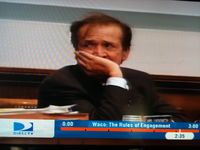 trace of emotion and the most headache-inducing comments from Chuck Schumer (who I voted for when I was a citizen of Yonkers, New York in the late 90s) and then the choked-up testimony from one of the few Branch Davidians to escape the inferno (because they had all been gassed to immobility---a fact the FBI admitted), the escapee describes the death-screams of all his friends and you see the first (and only) footage in the movie of a congressman showing any emotion at all. There's real pain in his eyes as he hears about children burning to death. I didn't recognize him until he removes his hand from his face and sure enough, it's Sonny. Not a word he speaks in the whole movie (kind of like Valley Girls). His movie credit comes from these few sections of a reaction-shot of his stricken face.

It's one of the most indelible Sonny images I've ever seen and one I will not soon forget.