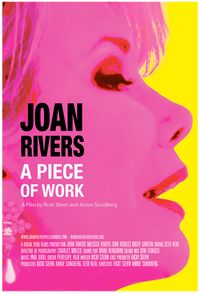 So...this piece of drama all went down last year but I just recently saw the documentary Joan Rivers: A Piece of Work on HBO last weekend…so it’s all fresh to me. This is a sad little documentary about show business and aging and workaholism. Yes, showbiz may love the young; but sometimes I wonder if it just isn't obsessed with the new (you can be old...as long as you're new)…which makes it tough for any legend such as Cher or Joan Rivers.

Rivers has a wall-sized filing system for all the jokes she's ever written, categorized by topic. This type of professionalism and organization impressed me. Anyway, Rivers had been working with Bill (of the Take Me Home liner note's "Billy, I love you Billy!") Sammeth as her manager since before her husband Edgar died (and maybe even far longer). Rivers seemed highly attached to him because he was her only collegue who could remembered her "old days." He was one of the few witnesses to her history. All through the documentary she has trouble reaching Sammeth and, in one tear-filled scene, she decides to let him go.

This was all fascinating to watch because I remembered Cher firing her long-time manager Sammeth in the late 90s and I wondered why. Was he fired for similar reasons? It turns out, he was.

After Sammeth was fired by Rivers, he sued her: http://www.thaindian.com/newsportal/entertainment/joan-rivers-sued-by-ex-manager_100385990.html

And predictably Sammeth was apparently upset about the way he was depicted in the Rivers documentary. Excerpts:

Still, several friends of Rivers’ say privately that Sammeth’s disappearances were something she complained about over the years. They also point out that she didn’t edit the film, and therefore isn’t responsible for how he comes off in it. “She had no approval of anything,” says one friend. “She did not have final cut. It was a movie about her—it was not ‘her movie.’” (Efforts to reach the film’s directors, Ricki Stern and Annie Sundberg, were unsuccessful.)

Sammeth and his lawyer, meanwhile, caution against reading too much into an old lawsuit filed by Sammeth’s other big client, Cher, in which she too accused the manager of not being attentive enough to her needs.

In it, counsel for Cher describes how Sammeth, “unhappy” with life in Los Angeles, relocated to Northern California in the mid-'90s and “attempted to continue the relationship from his home via cellular telephone. Eventually, communications between the parties deteriorated and… Cher terminated the 20-year relationship.”

As Sammeth recalls it, going into the third-person, “With Cher, Billy did not want to become the live-in person in her life. I bought that house on purpose so I didn’t become a prisoner for Cher. You give them almost all of your life, and then as soon as Cher saw that I was going to Northern California, there was a big red flag called abandonment.”

He may have a point. After all, Cher is legendary for firing people, having gone through over half a dozen agents during the 1980s. According to a New Yorker article about Sammeth in 2002, Cher actually fired him once and rehired him four days later. Sammeth thinks the root of the drama between them comes from Cher’s upbringing. “Her mother was married eight times, and twice to the same guy,” he points out.

[Cher is legendary for firing people? Wha?? Doesn’t Cher maintain some impressive long-term professional relationships? Like her costume designer Bob Mackie, her wig-maker Renate Leuschner, her personal assistant Deborah Paull, her choreographer Doriana Sanchez, Billy himself who started working with her in the late 70s? I can’t remember the last news story about a Cher firing. In fact when she fired Billy, it seems significant. And what does Cher’s mom’s marital tendencies have to do with anything???]

“Whatever happened between him and Cher, it was settled amicably,” Lask says. “In this business, people get hired and fired all the time. It’s a peculiar business with peculiar personalities with people who say ‘I love you, doll,’ and then terminate you.”

“I love Joan, I love Cher,” Sammeth says. “I do love them. This is not a bitter manager, he’s an upset manager, he’s angry. I got to a point—what is it? The Equal Rights Committee that said silence equals guilt.”

[Does that statement make sense to anybody?}

I don't know what is more sad, this story or the latest gossip that Cher's album has been pushed back to 2012.

2012?!Where did you hear this? The cd wasnt ever officially going to be released this year anyway...other than Cher saying so and we know what that amounts too.