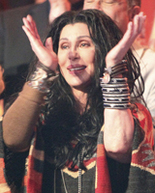 I threw a small dinner party last week and could never find the time to blog. But last week was a good one on Dancing with the Stars. Chaz did a tribute to his dad by dancing to the 60s song "Laugh at Me" written by Sonny. Chaz even wore the fur vest. The cover version was odd in that it replicated Sonny's phrasing exactly...and included his spoken-word intro to Cher ("I never thought I'd cut a record by myself but I got somethin' I wanna say, I want to say it for Cher and I hope I say it for a lot of people").

Unfortunately, rumbas are boring. And although the judges always love Chaz's courage and find him inspiring, they said this dance was not his best performance. They said he seemed distracted. And yet they gave him his best scores of the season. Huh? In any case, he retained his spot as the lowest on board.

John and I just hope he lasts longer than Nancy Grace. I still don't fully know her story but she does not connect with the audience at all. She's in her own dance bubble. Last week Kristin Cavallari was booted off. My friend Julie surmised this was because she had that bad reputation from the show The Hills. I also thought she might be hurting by being confused with Chynna Phillips, who is good but John and I find her too perfect to root for. JR did the most moving dance last week and I was glad David Arquette didn't get kicked off because he seems so fragile, I worry he would cry. I've grown tired of Hope Solo but Ricki Lake continues to float like a dream.

Last week Cher tweeted that she would come sit in the audience to cheer Chaz and this week she did. It was movie theme night...full of songs that don't lend themselves to good dancing...especially the mission impossible song Ricki Lake was given, the Psycho theme. She pulled it off though. It was amazing. JR, Hope, Carson and David all did well but Chynna choked for some reason. I felt bad for her and thought she would be spared since she's one of the top-four best dancers on the show. Alas, she was booted off anyway. I hope she keeps on dancin' because she's a natural. John remarked that all the hotties have been voted off already. Is this an anti-hotti-conspiracy?

Cher's first few shots from the crowd looked stern (she tweeted she was nervous) but by the time Chaz finished dancing she was crying  and seemed to almost hesitate with the urge to stand up, which she finally did. The pictures tell the story. It was an amazing moment of pop culture. Cher in proud mama mode. So sweet and touching. Not a side of herself she gives us much (for reasons understood) but it pulls me heartstrings it does.

Apparently grandma Georgia, brother Elijah and step-mum Mary Bono also came. They got zero airtime. Cher sat next to ex-Mrs-David-Arquette Courteney Cox. To her credit, Courteney has been at every show. Every time they come on camera I think David, Courteney and baby Cox-Arquette made a very adorable albeit shaky family unit.

Chaz ended up moving up on the board when Carson earned the lowest score.

Cher's appearance became a media blitz in papers and websites all over the country. Even early-morning radio shows. It seems Cher sneezes these days and it makes headlines. It wasn't always this way.

Here's a typical story from US Magazine: Mom is moonstruck by her dancing baby!

As anticipated, Cher was in the audience at Monday's Dancing with the Stars to cheer on her son Chaz Bono.

Flanked by other family members (her mother Georgia, her younger son Elijah Allman and Mary Bono, Chaz's stepmom and the widow of the late Sonny Bono), the Oscar and Grammy-winning star, 63, chatted up the famous family of another DWTS contestant: Courteney Cox and daughter Coco plus Rosanna and Patricia Arquette (all cheering on David Arquette, whom Cher called "darling").

Beaming and watching intently throughout the night, the "If I Could Turn Back Time" singer got emotional after her 41-year-old son (the show's first transgendered contestant) performed with Lacey Schwimmer -- along with her mom and Mary Bono. "She looked so proud!!" a witness says.

After the show, she lingered on set chatting with her family and other DWTS castmembers, and posed for pics with Chaz, Schwimmer and other family members.

So besides Cher, there were many other stars in the audience: Donny Osmond (who was on Cher's 1975 TV show with his brothers and on a Sonny & Cher Show with Marie), Dr. Phil (Cher's been on his show), Pee Wee Herman (Cher's was on his show too), Bruce Jenner and Mama Kardashian, Courtney Cox, Chynna's own Baldwin Billy, and Patricia and Rosanna Arquette (Cher and Rosanna both have a connection having both dated members of the band Toto).

The judges remarked that Chaz had improved and had fighter qualities (he danced to the Rocky theme). Judge Carrie Ann was crying too, saying she roots for Chaz because he's gotten under her skin.

On the results show, Susan Boyle sang "Unchained Melody" which reminded me of Cher singing that song as her first solo in 1965 as Sonny & Cher. That performance also showed Cher showing vulnerability. Like in her movies, Cher cries and we cry. Sure there's some art to showing us her tough chick side. But Cher seemed so authentic and moving rooting for Chaz.

Maybe there's a strategy in keeping that side of her rare like a pink panther diamond.

I'm just waiting for my friends to ask me why Cher is wearing an early-period-Madonna amount of bracelets, dread locks and an Indian blanket.

Cher...showing the gamut of emotions.

Cher's tweets after the show:

OMG! I WAS CRYING ! WASNT EXPECTING 2 B SO NERVOUS ! BROKE MY BRACELET CLAPPING ! IM SO PROUD !! CHAZ WAS GREAT! LOVED DAVID ARQUETTE 2nd

Last nite was GLORIOUS 4 me ! When Chaz 1st.decided 2 make the Transition I had fear,confusion & yes a little sadness,BUT LAST NITE I

I looked up at him brave! Giving 1001% & I thought ! U R BRAVE STRONG FEARLESS & LOVING PERSON BUT WHAT MOST IMPORTANT.. U R HAPPY !

I KNOW THERE R PEOPLE WHO WILL NEVER C HOW WONDERFUL U R, BUT LAST NITE I CRIED FROM PURE "JOY"! U GAVE EVERYTHING YOURE ALREADY A WINNER

YEAH ! CHAZ GETS 2 DANCE ANOTHER WK! THANK U 'S! DOES THIS MEAN IM ABOUT 2B CAST MEMBER OF DWTS I might HAVE 1 MORE CAMEO UP MY SLEEVE

That would be sweet!

Great commentary. Elijah was not there. It was Mary and Sonny's son. His name escapes me.