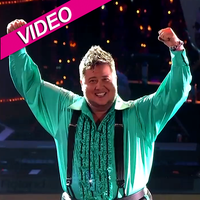 For admittedly personal reasons, I'm so glad Chaz's stint on Dancing with the Stars is over.

Because happily I've been having guests visit Santa Fe (my mother-in-law and sister-in-law just came for five days and my parents are due to arrive for ten days) and it's been hard to keep up although my mother-in-law is a fan of the show and we watched it after a trip to Camel Rock Casino...but I couldn't blog about it or vote last week.

Because these competition shoes are emotionally fatiguing...listening to the judges gripe, the dancers gripe, Hope and Nancy Grace gripe, watching Chaz dance with injuries due to the extra weight. I'm sure it must be hard for BOTH Nancy Grace and Chaz (even Ricki Lake says it's hard) to dance with extra weight...so therefore as a viewer you know this weight will set them back. The uncomfortable laws of physics. And the world of dance hates body fat (on men and women).  From my point of view as a woman who is sensitive about her wieight (and was anorexic myself at age 13), making jokes about a man's fat and not a woman's fat is a double edged sword. It's all fun and well for men to be heavy (implicitely acceptable and jolly) but it's a "serious issue" for women and one not to be joked about. This is why I think Ricki and Nancy were encouraged to lose pounds and Chaz was not. Is it really better for women? Is that why ballerinas are anorexic half the time? The issue is worhty of further debate.

Because that last show was rough to watch. Bruno Tonioli called Chas in his tux a "fuzzy penguin" and Chaz got pissed off: his face full of sweat and upset during the rest of the judging session (like he couldn't even hear the other judge's comments) and he was practically speechless during the vote tally, finally expressing his anger at the final sit-down, commenting on the double standard in judging weight between men and women. Which was all irrelevant drama sadly, because Chaz had done what he set out to do by making it into the top six, where arguably David, Ricki, JR and Rob are better dancers. Even Jimmy Kimmel got Chaz admit he didn't expect to win. I love Jimmy Kimmel, btw. So it was time to go, give or take a Nancy Grace.

I've also become addicted to Oprah's Lifeclass over the past two weeks and I wasn't going to mention this here (because everyone has their own opinion about Oprah and I'm new to the Oprah-craze) but Chaz himself tweeted that he'd been watching some of the classes too. And the lessons learned there surely pertain to Chaz's final experience on DWTS, which were unfortunately negative. The dance of 80s week was a triumph of fun and relatively good scores but Broadway week faltered when Chaz took on the character of Phantom of the Opera. The mask only obscured his charisma and his footwork wasn't to the level of the other contestants. Dancer Max was mean about it but he did speak the truth when he alluded to Chaz as he complained that Hope had been over-judged on technique and footwork when other contestants had been basically walking around the floor and getting a A for effort. Now I've been asking the voting-Gods to send Hope home for weeks now because of her inability to deal with not being number one, but that doesn't get Chaz off the hook for his sub-par dancing.

Oprah Lifelessons come to play here. Let's consider dancing itself. Chaz, do you really want to be a dancer? Seriously? Is this who you are? I thought the point of coming on this show was not only, as you said in your farewell, to show the world a different kind of man BUT to show the world that America's DWTS-voters would not reject a transexual man in week one...in week two...in week three...in week four...in week five. What a f*#king accomplishment! I so wished it could have been celebrated as such last night. Authentically you did above and beyond what you needed to do to that bum knee. Did the ego take over? 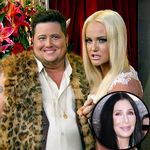 Remember Oprah's ego lesson. What are hurt feelings? You letting the ego take over. Why go on a competition show when you're feeling more confident than you ever have in your life? Why go on a show whose judges will eventually shred you for your looks, your weight or your dancing? Why put yourself out there for that inevitability? What was your true intention? I believed it was that your soul had a purpose that went beyond weight and dancing ability. The judges will say what they will say. It's their show (and Max's). But it's not their life to judge. And their comments are worthless at the feet of it. The first Oprah Lifeclass (and all of them, quite frankly) was transforming to me because I get my feelings hurt all the time. Was it Iyanla Vansant who said people's comments are just observations? Only you give them meaning.

By the way, the judges never said (or implied to my understanding of their comments) that you are a fat troll. Your own ego spoke those words. And that's the important judge.

Do judges comments affect votes? Maybe so. They gave very positive comments to Chaz for many weeks in spite of some okay-to-bad dancing and maybe that too affected voting. But unfortunatley it isn't about America's votes in the end (which is tragic because they kept a trans man in the show for six weeks) but about feelings and ego and weight loss.

John and I talked a lot about this last night. I wondered if the judges where confused about how to treat a trans man. John feels that Chaz getting angry over Bruno's comment did not make Chaz look good on national TV (it made him look like a sore loser) BUT it was a natural healthy male response.  John loved seeing a confident Chaz on the show but felt it was time for him to essentially "man-up" and admit he had gone as far in the competition as he was meant to go.

What's going on here has so much more to do with weight, dancing, gender and charisma. It's all mashed up together. Chaz is going through learning to live as a man and wanting to be treated as a man. And this is harsh but none of that is a dance-judge's problem. I don't care if the judges are assholes. This is Chaz's singular journey not theirs. And "feeling good about yourself" for any reason should never have been the goal of competing on a TV dance show.

John also commented that this show is harder for men because they must look like they are leading the dance. A good male dancer can make any woman look good because he can lead her around. It's harder for a talented woman dancer to make a man look good. John also said we all need to rewatch Oprah's show on the ego.

Bottom line: Chaz outlasted most of the show's hotties and I wish I wasn't so sad about the final week's drama. Carson Kressley left with ego-affirming grace last week. And he was a gawky, bad dancer. There's absolutly no shame in that.