A Spring of Tweets
Cher to Star in Comic Book

The Lady of Burlesque 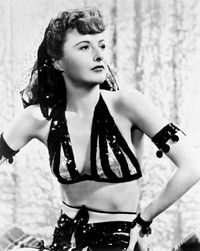 So you're aware Cher co-hosted Turner Classic Movies last week with Robert Osbourne. She, dressed in all black, curled up in one of the red chairs and talked about her favorite movies. She said she started out with list of 60 films that needed to be pared down to four.

I watched the first three movies that night. I had to catch this last one two days later, after going out with some friends of ours visiting from LA. But I want to start with this one because it was my favorite. Even Cher licked her lips when talking about it. Cher said this 1943 movie Lady of Burlesque was off the radar for many Barbara Stanwyck fans. Cher calls it hysterical and noted that it was written by Gypsy Rose Lee. Gypsy Rose Lee also wrote the movie TCM followed Cher’s set with, the musical Gypsy (a connection to both Cher and Rose Lee). I had never seen Gypsy and unfortunately my new Direct TV cut off the film half way through. After whining to John about it, he said "she grows up and becomes a stripper, her sister gets married and the mom gets pissed off."

Robert Osbourne and Cher talk about the “tootsie” aspect of Lady of Burlesque. I misunderstood this to mean there would be cross-dressing involved. Then they clarified this to mean “dolls and dames.” Oy, the generation gap. Cher calls the movie "fun...a perfect storm for happiness" and admires the Edith Head costumes for Stanwyck. Therefore, it's interesting to note here that Bob Mackie was once an assistant to Edith Head and you can see the line of influence.

Cher also enjoyed the movie as a story about strippers backstage, especially old tyme ones. Other Stanwyck films Cher likes: The Lady Eve and Christmas in Connecticut.

Barbara Stanwyck plays the headline burlesque performer Dixie. The club is in New York, off "The Great White Way" and this is the second film in Cher's set with performers working toward or on Broadway, the third film in the set about stage performers.

The burlesque show lives in an old opera house and is soon bu sted by the cops. Then two murders are committed--a bitchy stripper named Lolita La Verne and a former employee named Princess Nirvena. Twice Dixie is targeted. The whole time you wonder if the comic who has a crush on Dixie, Biff played by Michael O’Shea, is the culprit. I was very distracted by Biff because he looked a lot like a piano player I dated back in 2005.

The four films Cher selected are very different but there is a small thread about upward mobility and chaffing class conflicts among them all. In this movie, Dixie startes out wanting to get outa this burlesque and move on to something better. She also feels she's too good for no-good comics. However, by the end of the movie she decides she’s “not so snooty anymore” and she stands by her burlesque show.

This movie held my interest and was full of Interesting and likable background characters. There's lots of stagy, show-biz stuff going on and Stanwyck walks around looking glamorous and acting feisty. Two things right up a Cher-fan's alley.

The movie also reminds me about the need for classic film preservation. When I freeze-framed a portion of the movie, I could see a tear in the film that had been spliced together. Other scenes had damages to the print as well. How sad that the best TCM copy of this film was left to decompose this much.

Spoiler alert: Mark Twain did it.

IF ur gonna watch Gypsy the musical try and watch the version starring Bette Midler that was made for tv. It features Bob Mackie Costumes....the other version has a young ann jillian as gypsies lil sister "Baby June"...