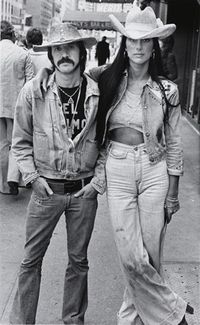 Ahhh, the sweet smell of almost-respect.

The snapshot review is titled "Legends on the Loose" and the five examples of representative legends chosen to showcase are Debbie Harry on Coney Island in 1977, The Ramones on their way to CBGB's in 1975, KISS posing for an album cover in 1974, John Lennon in Yonkers in 1975 and...wait for it...Sonny & Cher in the picture to the left taken on Lexignton Avenue in New York City in 1973.

Melissa Maerz calls the book "a disarmingly natural look at icons like Blondie and Cher before the era of the posed rock-star portrait kicked in."

But what a list of heavyweights to be included with. In the last decade, Cher's been making it into more and more of these lists of "legends." Like the theory of Starstruck, The Business of Celebrity suggests, it's all about who you're seen with.

I always loved this photograph of Sonny & Cher. They looked great together. I have a couple more of those taken at the same time.