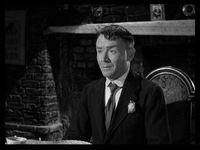 The second favorite movie from Cher’s TCM session was Hobson’s Choice. John actually watched this one with me and this was his favorite. (He watched all of them except Lady of Burlesque.)

The movie was directed by David Lean, famous for his big epics like Lawrence of Arabia, A Passage to India and The Bridge on the River Kwai and Doctor Zhivago….all of which I’m ashamed to say I have not seen.

Robert Osbourne labels Hobson’s Choice one of Lean's least known films. Lean made “this small overlooked film” in 1954, the year before he directed Katharine Hepburn in the very colorful Summertime, which I did see. That was the movie where Hepburn fell into that Venetian water and got an eye infection that made her eyes look very watery forever after.

In the TCM introduction, Cher talks about her favorite actresses: Ginger Rodgers, Ingrid Bergman, the Hepburn girls, both whom she met, saying Katharine was “tough.” She felt Bette Davis was transfixing but "so stylized."

About Hobson’s Choice, Cher says fabulous a few times and is particularly mesmerized by David Lean’s unique shots…from the first shot of the boot shoe sign to the scene where Charles Laughton is drunk and entranced by the moon in a puddle. She says the movie is about hope and remarks on the cast. She quotes Robert Altman as saying if you get the cast, you are 80% there. She also says the movie is a story told through hairstyles. Maggie’s hair goes from severe to soft as she falls in love. She describes Willie as having Alfalfa hair until he goes through his Maggie makeover.

John said it was like a Fiddler on the Roof story where a father loses control of all of his daughters. The father, played by Charles Laughton, acts like an ass and looks strikingly like Humpty Dumpty. I saw his character as funny but vaguely threatening as severely controlling fathers can be. But Willie was 100% adorable. He gets the rare male-makeover in this movie and his lines gave us the most laughs as he  transformed from the messy and illiterate shoemaker into the sophisticated architect of his own business. Even his accent changes.

And the shots were beautiful to watch. I would also give a shout out to the lighting.

My only criticism would be that our heroine, Maggie, didn’t meet a single challenge until the final scene when Willie argues with her over the name on the store sign. Every single scheme of hers worked as planned. Am I too tainted by the formulaic movies since the 70s? Give that runner a hurdle please.