Chaz on Dancing with the Stars
Rejected Blog Title: The Blog Goes On 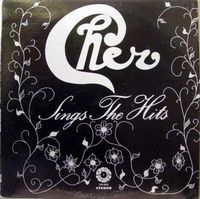 Thank you Cher scholar Robrt for reminding me of this most unfortunate compilation in your comment to last week's post.

It reminds me of a story. When I was a preteen, I found a list of Cher's ouvre in a record guide sitting in the entertainment section at our tiny B. Dalton bookstore at the mall. I secretly wrote the list out on an envelope found in my purse. Back then, you couldn't just peruse books with a cup of coffee like you can do at Borders (well before Borders went kaput). If you were caught reading something, you might hear: "Are you gonna buy that?"

With that stolen list, I was on a mission. My mother made my brother drive me from the burbs into the city of St. Louis to search the two local used record stores. It wasn't the bonding moment it would have been had I had a flamboyantly gay brother.

Soon, I found a list of more used record stores in the back ads of Rolling Stone magazine. Bingo! I hand-wrote letters to stores all over the country. I wish I had a copy of one of these dorky letters by my 10-year old self. Let me tell you, in the early 80s nobody was looking for Sonny & Cher records. Long story short, I was very excited to find someone in Indiana or some such place had a copy of Cher Sings the Hits. I was picturing an album of 60s covers. Okay so that pretty much describes any Cher or Sonny & Cher album of the 60s (give or take a few Sonny songs)...but I was imagining different covers, new covers. More hit-y covers. What I did not expect was another Cher compilation album of somewhat questionable hits like:

Ok, so some of those had been hits by other people. But clearly not all of them. And I took umbrage with the usage of the work the in the title, as if this indicated surely that these would be the definitive hits of the day.

Add to that the travesty that the album didn't even include a picture on the cover! Why did it exist?? It was my first moment of compilation dismay, heralding in a lifetime of more to follow. Do James Joyce scholars go through this? I don't think so.

Hi. I can't believe I've never been here before. I have a lot of reading to catch up on. Anyway, I felt the same way when I first came across this album. I was visiting the local record store a few years ago, when I decided I needed to own all the Cher albums on record. (I grew up in the 90's, so I came to love Cher later on in her career, when CDs were all the rage.) I completely cleaned out the record store's supply of Cher, and this album was in my pile of treasures. I almost left this one in the store, since it just didn't seem as awesome among some of my other finds, such as All I Really Want To Do and Cherished. I bought the album anyway, and there is some beauty in the simplicity of the cover art, even though the record is sitting in the dark in a box in my closet.

Can't wait to read more of your blog :)

is there any credit given on the album for the "cover art"?

I too have never been on here before!!

I started collecting Cher vinyl, I got a few; 'Stars' 'Bittersweet White Light', 'Look At Us', and I always came across compilations similar to this one. I did buy one or two, but eventually I decided to stop, I just like to buy her studio albums now. I did see 'This Is Cher' though, and considered buying it, but eventually didn't.

Thank you, Mary, for doing a whole post on this terrible, cheesy album (and its cover).

For the record, Cherthelatest, the album called "This is Cher" is a truncated reissue of her final Imperial Records LP, titled "Backstage." On the Sunset Records version, one song has been deleted; on the Pickwick version, two songs are gone. Just buy "Backstage" (a wonderful album), and you're there.

Good question about Cover Art credit. I will check when my copy arrives from my parents (with the rest of my stuff) from PA at the end of the month.

I have 'Backstage' on CD, and although I love two or three songs on the album, it really is not one of my favorite Cher albums.