Rejected Blog Titles: You Haven’t Seen the Last of Me, Blog
Sonny & Cher Once Again 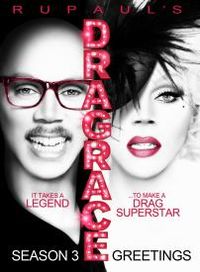 So if you've been reading along over the last six months, you know I've been addicted to the feminist empowerment enacted in drag to be found on RuPaul's Drag U. RuPaul publicized his latest book on the show so I read it, RuPaul's Workin It.

Synopsis review: the first chapter was awesome; the rest was a kind of sketchy thin diary of drag beauty tips.

There were three Cher mentions:

p. 87--Proportion is Everything: "From my collection of pop-culture influences, I added two parts Diana Ross, a pinch of Bugs Bunny, two heaping spoonfuls of Dolly Parton, a dash of Joseph Campbell and three parts Cher. It worked. I worked. You better work!"

[That's most parts Cher isnt' it?]

p. 97--Travels with my Wig: "In the early nineties, Lypsinka told me that Cassandra "Elvira" Peterson had told her that Cher had several kick-drum cases customized to house stationary wig heads for travel. So that's exactly what I did."

[Where do the drums go then?]

p. 98--Hair Proportions: "Cher can wear very long, flat hair because she has a long neck and long torso."

There are no Cher mentions in the book Starstruck, The Business of Celebrity by Elizabeth Currid-Halkett. And yet reading it you can't help thinking of Cher's longevity in regard to the tactics the book describes. It's somewhat of a academic and dry read that discusses mostly celebrity for celebrity's sake...people of Paris Hilton's calibre.

The basic idea is that you can ensure your celebrity status by making sure you are seen (and photographed) with other "hot" current celebrities. The book describes people's odd machinations to aquire fame by constructing friendships and publicity events. Perfect evidence of this appeared in December 2010's LA Magazine interview with a personal shopper who said, "One woman asked me to buy her ball gowns with matching shoes, Judith Leiber bags, and jewelry for every night of the week, then hire professional photographers to shoot her wherever she went, like paparazzi."

Who's to say how actively Cher Inc subscribes to this idea of recording and being photographed with the hippest kids of late (Lady Gaga); however, you don't see her doing duets with no hasbeens.