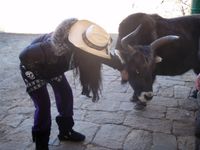 Is that Cher tweet pic with a bull? That looks perilous! If she gets gored at least she'll go to the hospital looking awesome in a cowboy hat!

There have also been some great pics fans have done superimposing Cher's face onto great paintings, my favorite being the Frida Kahlo one. I'm hesitant to repost them here without knowing the mashup-artist's name.

who is Kathleen? Red haired comedienne who used 2 b 1 of my Closest dearest most beloved friends ?  (April 7) 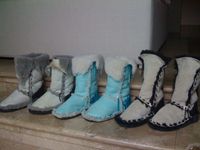 And we all know she loves Audrey & Katharine Hepburn but one fan asks about favorite leading men and she agrees with a list of Cary Grant, Gregory Peck and Jimmy Stewart (April 5)

And she's still trying to help the little kid with ecxema. Poor fella.

And she goes introspective....

have you ever had to do something that you didn't want to but had to do to survive? Ahh Yes ! (April 5)

what has been 1 of the most difficult time in your lifetime!' not now ! Write it in book ! Must Tell MY Story MY WAY (Apr 5)

you doing autobiography? Not yet ! gotta b little older ( as if that's poss.) & a few people gotta get senile (April 5)

Oh yeah. I hear that.

I don't listen 2 my music! As a matter of fact I'm always alittle embarrassed when I'm out & it comes on ! Hide my face & giggle (April 8)

What a beige environment for her!! I just seems so wrong! Like someone will ask her to type something or take dictation.

Well...no intention to bash Richard because I actually like him as a character actor (that scavenger hunt movie, that movie where he played the cuckolded husband to George Hamilton's Dracula). He's got his own charm. But as a director? I do not feel he saved Mermaids from quasi-drama-quasi-comedy purgatory. I'm just sayin.

Hey there,
I'd like to link your site on my blog, it's gonna be full of Cher stuff, reviews, pictures, updates yada yada yada
I love your site and I think that the facts yo present are pretty accurate and well researched, being a trivia nut when it comes to Cher myself I'm always impressed about what you know. Knowing other fans that don't have a friggin' clue.
Just don't wanna get my ass sued so let me know.

PS: Tried to send this twice as a email, didn't work.