Greer Garson Had a Blue Bathtub 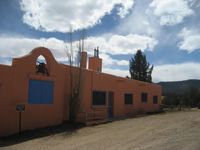 As long as I've been visiting and living in New Mexico, every time my family took the long drive up Highway 25, past Santa Fe and through Pecos and past Las Vegas, New Mexico (where we always stop to eat at El Rialto near the plaza) on our way to our family seat of the small town of Roy (where the Great Plains meet the Rockies), I'd always hear the story about how Greer Garson had a big house off the highway. Back when I was 17, I'd look off into the dark, dark New Mexico darkness and try to imagine this house. Every time we pass Pecos, the same story my Dad would tell about Greer Garson's house out there somewhere.

So I've moved here for a spell, as they say; and my relatives have been lamenting the rumor that the house and grounds had been sold off or destroyed. 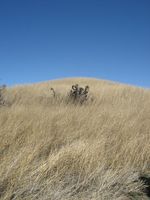 John and I live close to Pecos and John works with many Pecosites as a security guard. So we've visited to find hiking trails, indulge in their Dairy Queen and hear disparaging stories about one-time Cher boy-toy Val Kilmer (Pecosians don't care for him, it would seem) and to visit the Pecos Pueblo ruins and National Park, which we've been to now three times.

Much to my happy surprise, The Santa Fe Community College offered a continuing education tour of Pecos Pueblo, including Greer Garson's house! Whoo hoo! It's still there!

In fact, we were to find out, Greer Garson and her husband, Texas oilman Fogelson, owned so much property for their cattle raising, their land included the Pecos Pueblo. They donated the pueblo grounds to the National Parks service and Greer designed the small movie theater there to look like a Kiva and narrated the video about the site. (Ricardo Montelban does

Speaking of Jane Fonda, one of our elderly members on our tour still managed to say dismissive things about Jane Fonda due to her remarks about Vietnam. Her friend lightly defended Fonda, saying she has since apologized. I thought to myself, although Veterans still have a right to be pissed off about it, kids today don’t even know what that was all about. 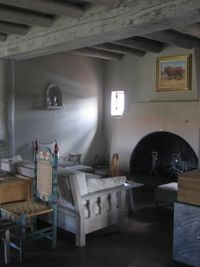 I told them that Fonda's latest workout DVD, Fit and Strong, is for old people and is still kicking my ass. I mean, I used to not like her because she could do aerobics better than me. That was before her titanium hip. Now I seem to like her much better. 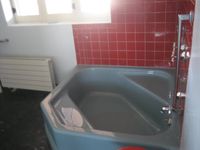 I remember Grandma pointing this out just about every trip we took to Albuquerque. I am glad it is still there.

Now I wonder about Dorsey mansion....

Did Grandma take you to Dorsey Mansion ever? It's still there...but not owned by the state anymore...privately held...they raise llamas I hear. But you can still take a tour in the summer. Will try this summer. We tried last summer but 5 miles up the 10 mile dirt road to the mansion my fuel pump went out. As I was disparaging Senator Dorsey at the time, I figured it was retribution beyond the grave. :-(

In fact, I am so obssessed with the Dorsey Mansion that I just bought a book on Senator Dorsey. Now if I could only find a book on Melvin Mills.

wow! those look amazing! I love oil rubbed bronze but it is so darn expensive! I already have couple projects in mind, but again, this stuff you can't get in our local place.